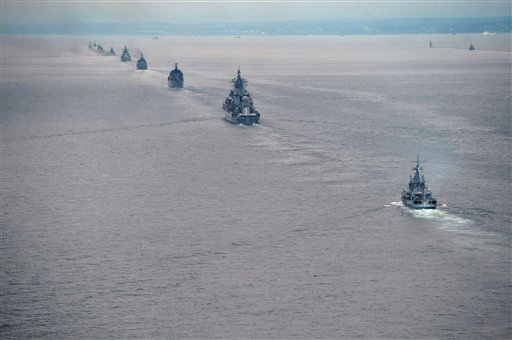 Russia has said that warships heading toward Brisbane, Australia, are part of a routine training exercise, but experts have said they are intended as a show of the country’s military power amid G20 talks. At the same time, Western leaders have threatened to issue more sanctions if Russia doesn’t stop backing rebels in Ukraine

Sources in Australian defense agency said that four Russian warships, including the Pacific Varyag missile cruiser, according to SMH.co.au. They are heading to international waters off of Brisbane, located on Australian eastern coast.

Australia has sent a few ships and a surveillance plane to monitor the Russian ships.

Opposition leader Bill Shorten described the move as a “stunt” and added: “As far as I am concerned, this is a distraction from families getting closure by finding out why was that plane shot down, who knows what, who was involved in that terrible atrocity.” He is referring to the downing of Malaysia Airlines Flight MH17 in July.

Maxim Raku, a spokesman for the Russian embassy in Canberra, said the ships are a routine exercise. “We are trying to widen our base because we have issues like global warming, scientific research in Antarctica, trade and international relations, so why not?” he said.

But ex-Chief of Army Peter Leahy said that Russia and President Vladimir Putin’s move is a message aimed at countries attending the G20.

“It’s more about Russia saying to the global leaders, don’t forget about us. We’re not just known as a European power, we’re also a Pacific power,” he told SMH.

At the same time, U.S. President Barack Obama and Canadian Prime Minister Stephen Harper both said that Russia needs to move its forces out of Ukraine.

“I guess I’ll shake your hand but I have only one thing to say to you: you need to get out of Ukraine,” Harper told Putin on Friday, via Reuters.

Putin did not give a positive response, Harper’s spokesperson told the news agency.

Obama said the US is set on “opposing Russia’s aggression against Ukraine, which is a threat to the world, as we saw in the appalling shoot-down of MH17,” while German Chancellor Angela Merkel said, “The present situation is not satisfying. At present the listing of further persons is on the agenda.”

Obama and European leaders are set on laying out further steps for sanctions on Sunday.