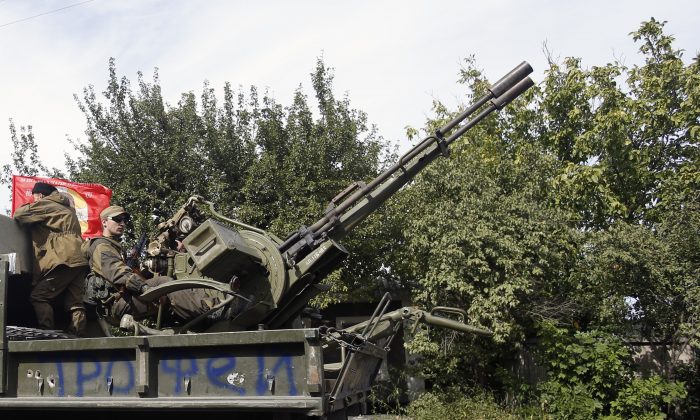 A Pro-Russia rebels truck with an anti-aircraft weapon is driven in a parade in the town of Luhansk, eastern Ukraine, Sunday, Sept. 14, 2014. Some semblance of normality is returning to parts of eastern Ukraine after a cease-fire agreement sealed between Ukrainian government forces and separatist rebels earlier this month, although exchanges of rocket fire remain a constant in some areas. (AP Photo/Darko Vojinovic)
Europe

In a farewell speech as NATO’s top civilian official, Rasmussen said the alliance finds itself on the front lines of a geopolitical division between “tolerance and fanaticism,” and “democracy and totalitarianism.”

“We must stand strong as a force for freedom,” said Rasmussen. He said NATO and its member nations must face the fact that the new security challenges it is now confronting could last for years.

Rasmussen’s five-year term as NATO secretary general comes to a close at the end of the month. He spoke at a Brussels gathering of the Carnegie Europe think tank.

Rasmussen said NATO must be ready to use military force, and to muster the political will when needed. In a question-and-answer session that followed his speech, he said he favored the use of armed force against the so-called Islamic State organization, which said not only threatens governments in the Arab world, but Western societies through the export of terrorism.

He said NATO as such is not considering involvement in such operations. He denounced the mass killings that the so-called Islamic State has carried out in territory that it has seized as “close to genocide.”

Rasmussen, a former Danish prime minister, said that under President Vladimir Putin, Russia had “trampled all the rules and commitments” that had keep the peace in Europe since the end of the Cold War, and had conducted illegal military actions against Ukraine.

He said he believed the NATO summit held in Wales this month demonstrated to Russia that the alliance is determined to defend its members.

The lesson of history, Rasmussen said, it that “appeasement does not lead to peace. It just incites tyrants.”