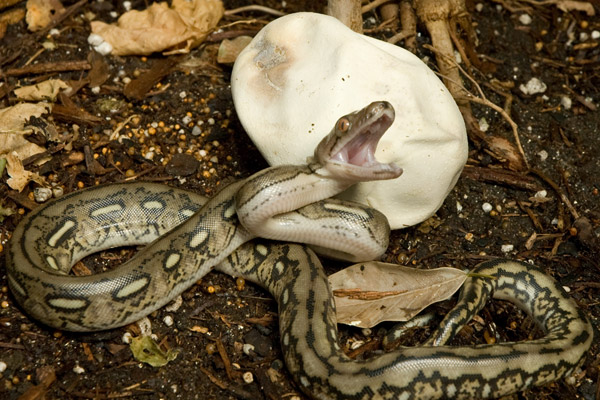 Newly hatched reticulated python (Malayopython reticulatus). These are one of the largest snakes in the world with the longest measuring 28 feet. (Julie Larsen Maher/WCS)
Environment

Snakes: Keepers of the Ecological Balance

Okay, so some snakes are so venomous they can kill you in 30 minutes (the inland taipan). And, yes, the fact that they don’t have legs is a little creepy to many people. And, admittedly, some scientists have even suggested that humans may have an inborn genetic terror of snakes as an evolutionary strategy to keep us safe from what may have been a major human predator.

But, all that said, snakes are beautiful. Snakes are wildly diverse. Snakes are important ecological predators, especially in keeping rodent populations in check. And let’s face it snakes have survived a lot longer than us: over 100 million years to date. Maybe it’s time we start treating them with awe and respect, instead of fear and disgust.

Yet snakes have long been under-represented in conservation initiatives. There are few conservation programs dedicated solely to a threatened snake species or to snakes in general. Moreover, in many cases we don’t even know what snakes are threatened. While the IUCN Red List, the world’s most authoritative body on endangerment levels, has evaluated nearly 100 percent of the world’s mammals, birds, and amphibians, it has only evaluated 43 percent of the world’s reptiles.

And snakes are still suffering from human vitriol and misunderstanding. For example, some parts of the U.S. still practice “Rattle snake round-up” fairs where wild snakes are captured and often killed en masse.

To see more snake photos: Snakes from Around the World.

Tbis story was originally written by Jeremy Hance, a contributing writer for news.mongabay.com. For the original article and more information, please click HERE.