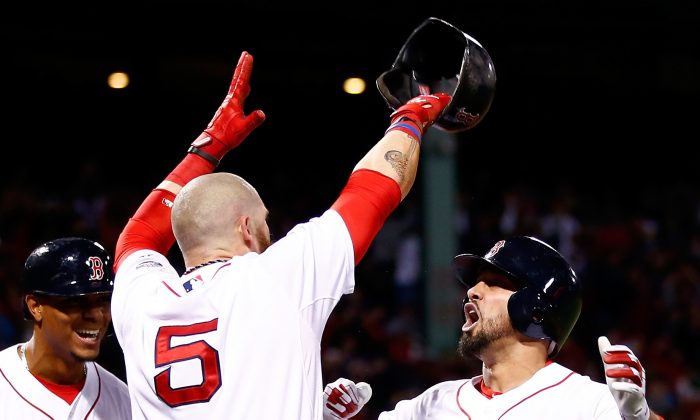 Shane Victorino (R) of Boston celebrates with Jonny Gomes (C) after hitting a grand slam against Jose Veras of Detroit in Game 6 of the ALCS. (Jared Wickerham/Getty Images)
Baseball

Baseball fans couldn’t ask for more this October: The top two winning-est teams of 2013, the 97-win Boston Red Sox and the identical 97-win St. Louis Cardinals, face off in the World Series, starting Wednesday in Fenway Park, to decide who takes home the hardware.

Does the best always take home the trophy? Of course not, but that’s what puts the fans in the seats.

On paper, these two teams are very evenly matched.

Boston led the majors—by plenty—in runs scored with 853. St. Louis was third with 783 and was the only National League team ranked in the top nine.

Pitching-wise, the Cardinals were fifth in the senior circuit in ERA at 3.42, while Boston ranked sixth in the AL with a 3.79 ERA.

Both Squads Have Clutch Hitters

David Ortiz has built a postseason resume that ranks among the greats—and that was before his eighth-inning grand slam in Game 2 of this year’s ALCS that turned the series around. Meanwhile teammate Jacoby Ellsbury is having himself quite a playoff run. The impending free agent is hitting .400 through 10 games, with 5 RBIs, 5 walks, and 6 stolen bases.

But the Cardinals can counter that with several clutch stars of their own.

Carlos Beltran doesn’t have any World Series rings but he’s a career .337 hitter in the postseason (through 45 games) with 16 home runs and a .724 slugging percentage. Meanwhile though Yadier Molina (.256 average, 4 RBIs) and former World Series MVP David Freese (.189 average) have yet to turn it on in these playoffs, both are capable of changing the complexion of a series with their bats.

Managers Are Another Close Call

Boston’s John Farrell is in just his third season as a big league manager. In this, his first season in Boston, the former pitching coach has proven he can clearly turn around a staff—let alone a team. The Red Sox were awful last season (just 69 wins) and pitching was an area that needed improvement—and they got it when Farrell came over from Toronto.

Meanwhile St. Louis’s Mike Matheny is even greener. The former Cardinals catcher is in just his second season as manager, and has led St. Louis to a pair of postseason trips. But he’s still learning and it’s tough to say how big of an impact he’s had.

Since managers usually distinguish themselves with their postseason decisions (think of the difference between Boston’s Grady Little in 2003 and then Terry Francona in 2004) and these two are in the infancy stages of their postseason careers we’ll call this a draw as well.

So where are we headed? This series is coming down to some intangibles to determine the winner. Let’s take a look at them.

If you’re looking for a mental advantage for the Cardinals, this really isn’t one of them. Sure, Matheny was with St. Louis then as a catcher (as was his platoon-mate Yadier Molina) but his top starter Michael Wacha was a 13-year-old in junior high at the time. Meanwhile Boston has had a near complete turnover as well, with only David Ortiz as the holdover from that time.

2. The Red Sox Have Home-Field Advantage

Though home-field advantage isn’t as big in baseball as it is football or basketball, it at least gives the Red Sox another game to have David Ortiz at DH. The Red Sox need him in the lineup, though not necessarily in the field, when a big hit is needed. If he doesn’t start in St. Louis though, Farrell can always cherry-pick a good place for a clutch hit from Ortiz.

Hard to believe that the Red Sox, who’ve won two of the last nine World Series championships, would be all that hungry for another but this is a squad fresh off an embarrassing 69–93 season that hadn’t played in the postseason since being swept by the Angels in the 2009 ALDS. The Cards won the series just two years ago and would be in line for their third in eight years, should they beat Boston.