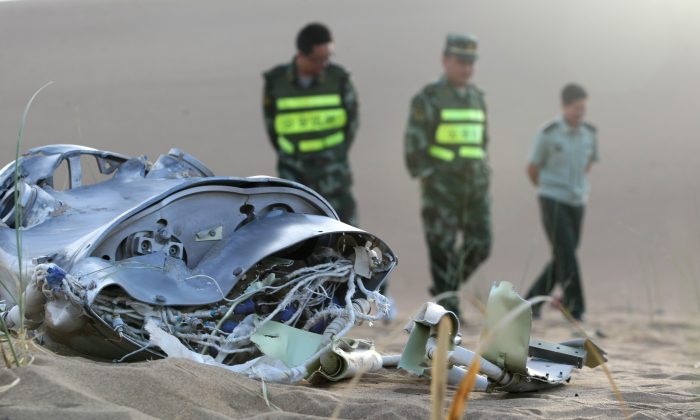 Remains from a Chinese space launch are left in the Badain Jaran Desert on June 12, 2013, in Alxa League, Inner Mongolia Autonomous Region of China. The Chinese regime is making a push to defense space-based weapons. (ChinaFotoPress/Getty Images)
China

The entire network of U.S. military and intelligence satellites may soon be controlled through a single command center, jointly operated by the Department of Defense and the Intelligence Community.

“All the pieces are there,” he said. “We just need to make sure all the authorities are clear, and that’s the difficult part.”

This is the latest in a recent string of global developments around space warfare, each of which was significant enough to have experts question whether something more is at play behind the scenes.

In order to maintain military dominance, the United States needs to consider all its space assets “as part of a single constellation,” Welsh said. “And if an adversary tries to deny us the capability, we must be able to respond in an integrated, coordinated fashion.”

“A new command structure is certainly warranted,” said Rick Fisher, senior fellow with the International Assessment and Strategy Center, in a phone interview.

The United States has a fundamental dependence on its satellites, he said, “and these have been targeted systematically by China.”

Space and cyberspace were named the main grounds for warfighting by the Chinese regime’s People’s Liberation Army (PLA) in its new guiding military strategy announced in May.

The PLA’s new strategy names space and cyberspace domains as the “commanding heights of strategic competition,” according to a June 23 report from The Jamestown Foundation. The strategy was released by the Chinese regime’s Central Military Commission.

“China’s real goal is to gain control of the earth–moon system,” Fisher said, noting this isn’t a new concept. He said even in the 1950s, the United States and the Soviet Union were looking at whether it was possible to have a presence on the moon.

Yet, while the United States deemed early on that long-term survival on the moon was technologically impossible, the Chinese look at it differently. Fisher said they think they can do it, and “they have committed themselves to that goal.”

Fisher said the Chinese regime’s ambitions for space missions aren’t just about science. The programs are closely tied to its People’s Liberation Army, and they’ve already developed accompanying assets for China’s space programs that will help them impose military control in parts of space.

Space warfare, he said, is the most direct path for the Chinese regime to compete with the United States militarily. Rather than trying to match the U.S. Navy and Air Force, it could just build some specialized missiles, some space planes, and a bunch of platforms to send to the moon.

During a Feb. 18 congressional hearing, Kevin Pollpeter, deputy director of the University of California Institute on Global Conflict and Cooperation, detailed the military interests the Chinese regime has for its space programs.

He said Chinese analysts writing on space “argue that it will become the center of gravity in future wars and one that must be seized and controlled,” and said the first step in these ambitions “is to achieve space supremacy.”

The U.S. defense community appears to be waking up to this emerging threat.

Just before the PLA’s new strategy was released, top-level officials of U.S. Space Command and the U.S. Air Force broke their silence and warned of growing threats from the Chinese regime.

During the annual Warfighters Lunch on April 14 at the Space Symposium in Colorado Springs. Air Force Lt. Gen. Jay Raymond confirmed that the Chinese regime successfully tested an anti-satellite missile on July 23, 2014.

He also declared, “soon every satellite in every orbit will be able to be held at risk,” according to Breaking Defense. This statement lends some background to why the United States is discussing a consolidated command center to guard every satellite in orbit.

Bunker said the Chinese regime’s focus on space warfare is very similar to its focus on cyberspace. He said that both “could be utilized against a technologically superior U.S. military.”

Much of the defense community was still unclear about the threats of the Chinese regime’s anti-satellite weapons. Yet, this changed during the symposium, according to William Triplett, former chief counsel to the Senate Foreign Relations Committee.

“What I’m told is the whole China space ASAT [anti-satellite] thing, that really made the rounds,” he said, in an earlier interview with Epoch Times. “I was told it was the hot topic.”

Close to two weeks after the conference, Raymond stepped forward again alongside Gen. John Hyten, commander of Air Force Space Command. The two appeared on a segment of “60 Minutes” and gave a rare inside look at U.S. Space Command.

Triplett noted it was highly unusual for the head of Space Command to give such an appearance, and to grant such access—let alone the fact that they called out the Chinese regime directly. He said, “Somebody somewhere has made a political decision,” by granting access to “60 Minutes,” and by allowing the statements.

CBS correspondent David Martin noted at the beginning of the segment, that the role of Space Command is “part of a complex—and mostly secret—battle for what the military considers the ultimate high ground.”

Not long after the “60 Minutes” segment, in early May, the Pentagon released its annual report on the Chinese regime’s military and security developments, where it declared “China possesses the most rapidly maturing space program in the world.”

It also said the Chinese regime’s “continued development of destructive space technologies” is a “threat to all peaceful space-faring nations.”

News that the United States could soon build the joint command center for space warfare first emerged around a month later. Defense One reported on June 23 that the Pentagon was “rushing” to open the center, in order to “fend off Chinese and Russian attacks on U.S. military and government satellites.”

The center was set to open within six months, according to an announcement from Deputy Defense Secretary Robert Work, during the GEOINT symposium, an annual intelligence conference.

“The ugly reality that we must now all face is that if an adversary were able to take space away from us, our ability to project decisive power across transoceanic distances and overmatch adversaries in theaters once we get there … would be critically weakened,” Work said, according to Defense One.

Russia appears to be making a move similar to the one the U.S. military is considering. Its defense minister, Sergei Shoigu, announced on Aug. 3 the creation of a new branch of the Russian armed forces, the Aerospace Forces. This will bring its air force and its recently created Aerospace Defense Forces under a unified command.

The focus of the Russian joint command center will be different from the U.S. one, however. In addition to space forces, it will also oversee the Russian air force and its anti-missile defenses.

It builds on Russia’s current Aerospace Defense Forces, which was started in 2011, according to The Moscow Times, to defend Russian airspace “from airborne and space-borne attacks.”

A key reason behind Russia deepening this system, it said, is that Russia, the United States, and China “are all working on anti-satellite weaponry that could bring war into space, prompting the imperative of new defensive strategies.”