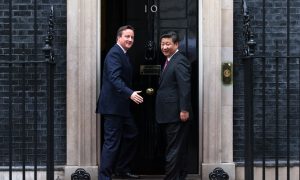 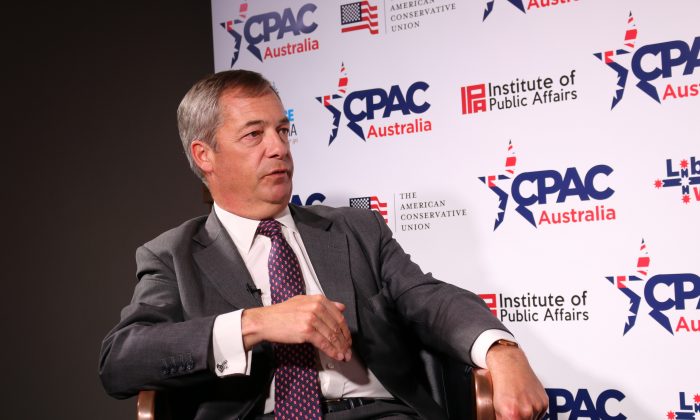 Nigel Farage at the CPAC Australia conference in Sydney, Australia, on Aug. 10, 2019. (The Epoch Times)
UK

Protests in Hong Kong against Beijing’s encroachment have put the spotlight on the “very real issue” of how to deal with the Chinese regime, Nigel Farage, Leader of the U.K. Brexit Party, said on the second day of the Australian Conservative Political Action Conference (CPAC).

The Chinese regime would be considering whether “they want another Tiananmen Square on their hands because that I think is what we’re talking about now,” Farage told The Epoch Times at CPAC in Sydney on Aug. 10.

Farage was referring to ongoing protests in Hong Kong over a proposed extradition bill, which, if passed, could see people being handed over to mainland China to face trial in its opaque legal system.

For more than two months, millions of Hongkongers have taken to the streets to protest the bill, which is seen as a tool used by the Chinese communist regime to erode the city’s autonomy and freedoms.

Hong Kong reverted from British to Chinese rule in 1997 under conditions stipulated in the Sino-British Joint Declaration, which is set to expire in 2047. Under the agreement, Beijing guaranteed the city would retain its extensive freedoms and political system, including its independent judiciary and free press.

But according to Farage, China does not play by “the international rule book”. Farage credited U.S. President Donald Trump as the first global leader to call this out.

“I think Trump does make a difference in all of this … he has voiced many of the concerns about China that others have felt, but not being brave enough to actually say,” Farage said.

“There is a clear deal set out that until 2047, things should be carrying on pretty much as they are. China clearly is in very, very open breach of that,” he added. “I think we need to bring the rest of the world together more strongly behind the rights of Hong Kong citizens. And at the moment, I think the world’s been too weak on this.”

Farage said that free speech is under attack in the Western world.

“We see it in politics, we see it in media, we even see it in our universities where the demand for safe space means that certain speakers that might upset the thought processes of others are banned from universities,” he said.

The left’s intolerance of other ideas may undermine the operation of democracies, Farage said.

“This actually takes us into quite dangerous territory because for civilized democracy to work, you have to have a concept called the loser’s consent. The loser has to accept they’ve lost the election, or for the moment they’ve lost the argument,” he said.

This, though, is unlikely to find support among broader society, he said.