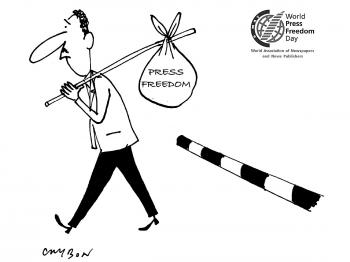 By Stephen Jones
Print
LONDON—A minute’s silence will be held in newsrooms across the world today for the 1,500 journalists executed over the last 14 years, as rights groups claim that media freedom is at its worst ebb in eight years.

In its annual survey, U.S.-based watchdog organization Freedom House claims that 2009 saw a decline of press freedom in almost every part of the world. In April alone, 17 journalists died violently, making it one of the bloodiest months on record, another rights group claimed.

The one minute of silence will mark “World Press Freedom Day,” which is held annually on May 3.

Among the countries singled out as being the “worst of the worst,” were Belarus, Burma, Cuba, Equatorial Guinea, Eritrea, Iran, Libya, North Korea, Turkmenistan, and Uzbekistan.

Karin Deutsch Karlekar, who managed the study, said that there was serious concern about the backtracking of democracies including Namibia, the Philippines, Senegal, and South Africa in terms of freedom of expression.

“Journalists in many countries cannot do their job without fear of repercussions,” Karlekar said.

The Freedom House report singled out the U.K. for its expansive libel laws, which encouraged foreign governments and businesses to pursue their cases through British courts—a practice increasingly known as “libel tourism.”

Last weekend, three reporters in Nigeria were murdered, bringing the total number of journalists killed in April to 17.

The International News Safety Institute, which supports journalists in troubled areas, reports that in the first four months of this year 42 journalists were killed—an increase of 13 percent since last year.

The organization, which is calling for the one minute of silence on World Press Freedom Day, claims that 2009 was one of the most violent years on record, with a total 133 journalists killed.

Its recently published report claims that over the past 14 years, some 1,500 journalists died on the story. In 8 out of 10 murder cases, no one was brought to justice, the organization said.

“This is a stark reminder of the terrible price we pay for our news around the globe,” said INSI Director Rodney Pinder.

His political rivals allegedly told him that he would be chopped into pieces if he stood for election in the Philippines, Maguindanao Province. However, Esmael Mangudadatu invited 37 journalists to accompany a group of his supporters who were to file the candidacy on his behalf in the provincial office in Shariff Aguak.

His thinking was that nobody would attack the convoy if there were so many journalists present. However, the massacre that occurred on the morning of Nov. 23, 2009—which left 57 people dead—has been claimed by media groups to be the deadliest attack ever on freedom of the press.

The Committee to Protect Journalists (CPJ) claims that the Philippines has a “culture of impunity,” which has led to the deaths of an increasing number of journalists.