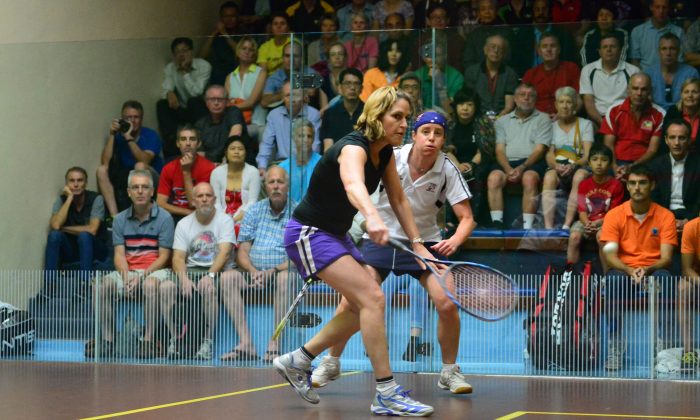 HONG KONG—It was great to see more than 750 sportsmen and sports women in Hong Kong last week coming from all over the world to play for a World Championship which ended on Friday July 11. What was even more pleasing was that they played for the love and pride of playing and winning and not for money. In addition, a large number of mainly Hong Kong volunteers took a week off work or assisted after work to help with all the associated tasks needed to make the event a huge success.

Most participants were delighted to come to Hong Kong and for many it was for the first time. They really were impressed by Hong Kong as a City and were eager to see the sights and visit the markets after their squash endeavours were finished. They were equally impressed with the organisation and facilities provided for the Championships. However, there were a few people who found Hong Kong too noisy, too fast and too overcrowded.

The winners were naturally delighted to win a World Masters medal (Gold, Silver or Bronze) with successful squash players coming from many countries, but Australia and South Africa with their large squads dominated the main competition.

Australia won 7 of the 17 finals but the other 10 were spread between seven other countries: South Africa (RSA) (2), USA (2), England (2) and one each by Egypt, Ireland, Scotland and Cayman Isles.

In the Silver Medal runners up spot Australia won another 6 events and RSA won 5 with the others taken by Denmark, New Zealand, Zambia, Canada and France.

Hong Kong’s most successful player Peter Hill who won a Bronze Medal in the 50+ event. Peter had a tough 5-set match against the No.1 seed, Australian ex-professional Brett Martin who was a leading player on the International scene from 1986 to 1997. Martin achieved a top ten ranking for much of his time as a professional and securing the number 2 spot in 1994, at an era when the Pakistan great, Jansher Khan, was at his peak.

Hill’s was in the lead by 2-games to 1, but Martin came back to take the next two games to move him to the final.

Chad Sunde was the next highest placed Hong Kong player winning the Special Plate Final (played between the 3rd round losers of the Main Competition) in the 40+ event. Sunde was knocked out of the main draw by No.1 seed, Australian Craig Rowland, the eventual winner of the 40+ Gold Medal.

Brian MacDougall reached the final of the Men’s 55+ Special Plate, but lost to Garth Van Rensburg of South Africa in a close 5-setter.

Other notable Hong Kongers were David Mallinson who beat Simon Barton of New Zealand in 4-games to take the 45+ Plate Title.

Consolation plate winners contested by the 1st and 2nd round losers of the Plate competition, included Do Do Kwok (Ladies 35+), Lau Chuen Ip (Men 60+) and Kenneth Chung (Men 65+).