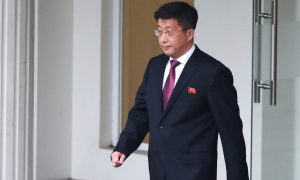 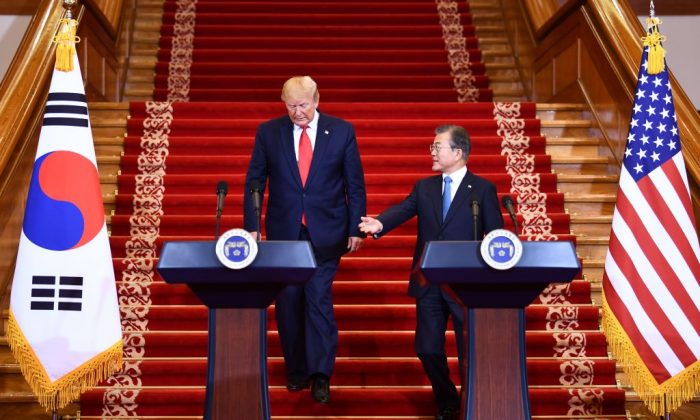 Trump Confirms He Will Meet Kim Jong Un at DMZ

President Donald Trump confirmed in a press conference on Sunday afternoon that he will be meeting North Korean leader Kim Jong Un at the Demilitarized Zone (DMZ) later in the day, raising hopes that a short but friendly meeting could further help denuclearization talks.

“I have been told that Kim Jong Un would like to meet,” Trump told reporters earlier a bilateral meeting with South Korean President Moon Jae-in. Trump said that officials were in the “final stages of working out a very quick meeting.”

Trump said Sunday morning that if the meeting was possible, “It’s going to be very short, virtually a handshake. But that’s OK. A handshake means a lot.

“North Korea and South Korea are both in much better places than they were two and a half years ago,” he added. It’s day and night.”

He complained, however, that from the “Fake News media” reports, you wouldn’t be able to tell that much has changed.

“We really appreciate it from Kim Jong Un.”

Trump said that his personal relationship with Kim remained strong.

Continuing on about fake news reports, Trump said, “At home, they think that I’m a tough ‘war monger.’ They thought that when I got elected, within the first year, we’d be in World War III.

“In my opinion, had President Obama, or somebody like President Obama … had it worked that way, I honestly believe you would have been at war with North Korea.

“And I am really the opposite of a war monger. But we’ve built our military now and it’s strong than it has ever been. We’ve spent $716 billion this year, $700 billion last year.

“I just want to tell you, you’re our friend,” Trump said of South Korea.

“We’re doing a lot for you—we’re spending a lot of money.

“We have 42,000 soldiers, you’ve had them for many years,” Trump added, saying that the United States remained committed to helping keep South Korea a “safe country.”

Trump arrived in Seoul late on Saturday for talks with South Korean President Moon Jae-in after attending the Group of 20 summit in Osaka, Japan, during which he made an offer to meet Kim.

If Trump and Kim meet, it would be for the third time in just over a year, and four months since their second summit in Hanoi, Vietnam broke down.

Trump is scheduled to visit the heavily armed border on Sunday afternoon with Moon. According to a tour firm, the DMZ is currently closed to tourists on the North Korean side, reported AFP.

Moon said during the Sunday morning meeting that the possibility of a Trump-Kim meeting at the DMZ represented a “big hope to everyone.”

“This would be a significant milestone in the peace process on the Korean peninsula.”

He also told Trump during dinner on Saturday that even if the handshake did not take place, Trump’s offer would have a “significant outcome” because Trump showed sincerity to Kim.

Trump made the offer to meet Kim in a message on Twitter about his visit to South Korea.

“While there, if Chairman Kim of North Korea sees this, I would meet him at the Border/DMZ just to shake his hand and say Hello(?)!” Trump wrote.

The North’s official Korean Central News Agency reported First Vice Foreign Minister, Choe Son Hui, saying on Saturday that North Korea was still waiting for the United States to send an official invitation for a DMZ meeting on Sunday. According to political commentators in Seoul, the statement suggested that there was a possibility that the North could accept Trump’s invitation upon receiving a formal invitation, Newsmax reported.

If Kim attends, it would serve as “another meaningful occasion in further deepening the personal relations between the two leaders and advancing the bilateral relations,” Choe told KCNA.

With reporting by Reuters reporters Roberta Rampton and Hyonhee.