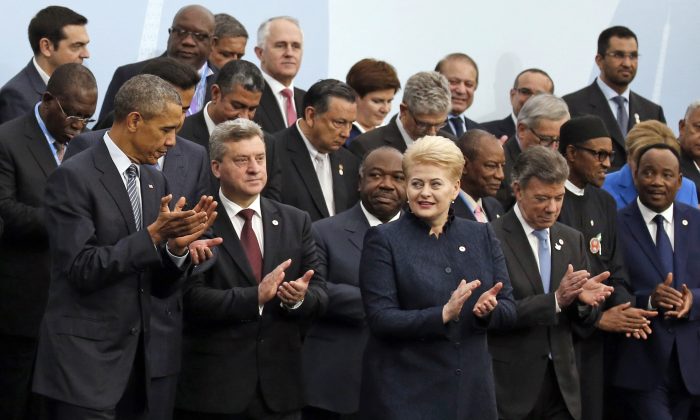 LE BOURGET, France—With dramatic vows to save future generations from an overheated planet, the largest gathering ever of world leaders began two weeks of talks on Nov. 30, aimed at producing the most far-reaching pact yet to reduce greenhouse-gas emissions and avert environmental havoc.

“We should ask what will we say to our grandchildren if we fail,” British Prime Minister David Cameron said as the U.N. climate summit opened under heavy security on the outskirts of Paris, two weeks after the extremist attacks that left 130 people dead. “Instead of making excuses tomorrow, let’s take action today.”

Even before the gathering, more than 180 countries pledged to cut or curb their emissions, but scientific analyses show that much bigger reductions would be needed to limit man-made warming of the Earth to 2 degrees Centigrade (3.8 degrees Fahrenheit) over pre-industrial times, the internationally agreed-upon goal.

The biggest issue facing the 151 heads of state and government at the summit is who should bear most of the burden of closing that gap: wealthy Western nations that have polluted the most historically, or developing countries like China and India that are now the biggest and third-biggest emitters of greenhouse gases?

The last major climate agreement, the 1997 Kyoto Protocol, required only rich countries to cut emissions, and the United States never signed on. Since then, global temperatures and sea levels have continued to rise, and the Earth has seen an extraordinary run of extreme weather, including severe droughts and storms.

The pact is meant to chart a path toward reduced reliance on coal, oil, and gas and expanded use of renewable energy such as wind and solar power.

This new round of talks seeks to produce an agreement that would require all countries, rich and poor, to take action.

While the specifics have yet to be worked out, the pact is meant to chart a path toward reduced reliance on coal, oil, and gas and expanded use of renewable energy such as wind and solar power.

The negotiations will focus on whether emissions targets should be binding or voluntary and how to verify that countries are hitting their targets. Another big issue will be how to provide the finance and technology that developing countries will need to reduce their emissions and cope with the effects of rising seas, intensifying heat waves, and floods.

“The future of the people of the world, the future of our planet, is in your hands,” U.N. Secretary-General Ban Ki-moon told negotiators in his opening remarks. “We cannot afford indecision, half measures, or merely gradual approaches. Our goal must be a transformation.”

India and China say they want the agreement to clearly reflect that industrialized nations bear the biggest responsibility for the problem.

“I’ve come here personally, as the leader of the world’s largest economy and the second-largest emitter, to say that the United States of America not only recognizes our role in creating this problem, we embrace our responsibility to do something about it,” Obama told the conference.

Developing countries say they need financial support and technology to make the transition to cleaner energy.

China is catching up, though, and is now the world’s biggest greenhouse gas polluter, accounting for 28 percent of the world’s current emissions—twice as much as the United States. Beijing has pledged to put a ceiling on its emissions around 2030 as part of the latest negotiations.

Developing countries say they need financial support and technology to make the transition to cleaner energy. On the bustling first day of the conference, a number of such initiatives were announced, including one backed by 19 governments and 28 leading global investors, including Bill Gates and Facebook’s Mark Zuckerberg.

Their initiative would provide billions of dollars in investments to research and develop clean energy technology, with the ultimate goal of making it cheaper and more reliable.

Many of the leaders said the world must keep the average temperature within 1 degree C (1.8 degrees F) of current levels—and, if possible, to half that, to spare island nations threatened by rising seas. The world has already warmed nearly 1 degree Celsius since the beginning of the industrial age.

Beijing on Monday, Nov. 30, reported one of the worst spells of air pollution in years, saying levels of soot were 25 times what the World Health Organization considers safe. That’s a different pollution from carbon dioxide, but both come from burning fossil fuel, especially coal.

Unlike the Kyoto Protocol, which had binding emissions targets for wealthy nations, the new deal will be based on a bottom-up approach where countries set their own targets. One of the things being negotiated is a ratchet-up mechanism that would encourage countries to review and improve their targets every five years.