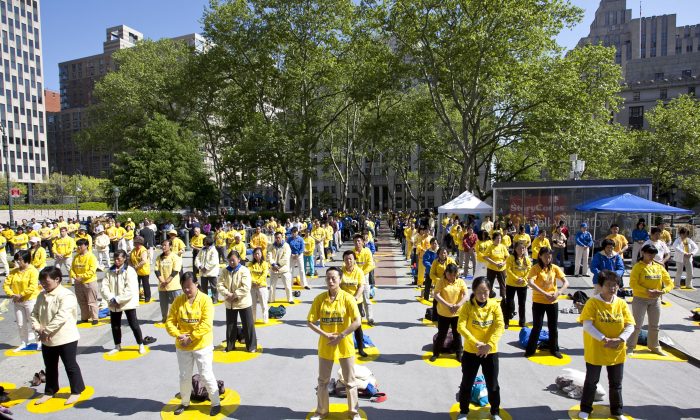 Falun Dafa practitioners in Lower Manhattan’s Foley Square demonstrating the gentle Falun Dafa exercises on May 12. Practitioners gathered in honor of World Falun Dafa Day, which falls on May 13 and marks the day the spiritual practice based on truthfulness, compassion and tolerance was introduced to the public in China. (Samira Bouaou/The Epoch Times)
New York

May 13, 21 years ago, marks the day the spiritual practice was introduced to the public in China by Mr. Li Hongzhi. Falun Dafa, also known as Falun Gong, includes a set of four gentle exercises and meditation, and a teaching for self-improvement based on the principles of truthfulness, compassion, and tolerance.

Apart from demonstrating the exercises, practitioners presented a lineup of music and dance performances. One could spot the traditional musical instruments like the pipa, an ancient Chinese lute, the Chinese gourd flute called “Hulusi,” and guzheng, an ancient Chinese zither. Dance performances ranged from Chinese handkerchief dance to a Tibetan folk dance. The lion and dragon dances, a traditional part of Chinese celebrations, entertained the audience as well, much to the delight of the young onlookers.

An ancient practice passed down throughout history from master to disciple, Falun Dafa is now practiced by people all over the world, according to the Falun Dafa Information Center. Celebrations for the World Falun Dafa Day can be spotted in almost every large metropolitan area across the world. Except for China.

As it spread from person to person free of charge (even all its texts and teaching materials are downloadable for free from the official website), Falun Dafa (or also Falun Gong) swept China on a massive scale in the early 1990s. By 1999 the official statistics estimated the number of practitioners to be 70 million to 100 million, vastly exceeding the membership of the ruling Communist Party. That was when the leader of the Party Jiang Zemin ordered the practice to be “eradicated.” Since then, millions of practitioners have been imprisoned and thousands persecuted to death, according to Falun Dafa official website Minghui.org. Some independent investigators, like Canadian human rights lawyer David Matas, estimate the number of victims to be at least in the tens of thousands.

Moreover, Matas and other investigators found the communist regime uses imprisoned Falun Dafa practitioners as a source of organs for transplants.

The transplant industry in China suddenly exploded with the launch of repressions against Falun Dafa. From hudreds of operations around 1999 to tens of thousands just a few years later. Investigators gathered hundreds of interviews with formerly imprisoned Falun Dafa practitioners, former and current hospital staff, and occasional hints from Chinese officials corroborating that Falun Dafa practitioners have been singled out as victims of a massive state-sponsored organ trade. Matas estimated some 40,000 were killed through organ harvesting between 2000 and 2007. Despite rising international pressure on the issue, Matas believes the practice still continues today.