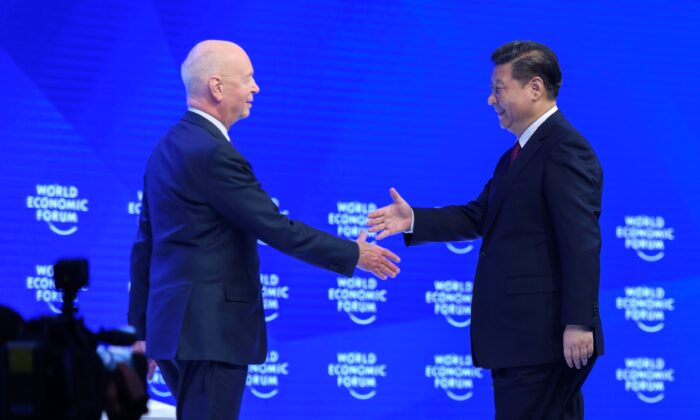 Chinese leader Xi Jinping shakes hands with founder and executive chairperson of the World Economic Forum, Klaus Schwab, prior to delivering a speech on the first day of the WEF in Davos, Switzerland, on Jan. 17, 2017. (Fabrice Coffrini/AFP via Getty Images)
Thinking About China

Endorsed by the Chinese Communist Party (CCP), the World Economic Forum (WEF) is advancing its globalist agenda, which is more social engineering than economics.

“Globalization has slowed down recently, and a trend of anti-globalization has emerged … multinational companies need to transform and implement inclusive development strategies,” Faisal Alibrahim, Saudi Arabian minister of economy and planning, said during a speech at the World Economic Forum Special Virtual Dialogue on July 19 on how private companies should partner with governments to push for globalism.

Stymied by COVID-19 lockdowns, the U.S. trade war with China, and U.S. sanctions against Russia for the Ukraine invasion, globalization had been paused. But now, the WEF is back and fueled by China.

On July 19, Chinese Premier Li Keqiang attended the WEF Special Virtual Dialogue, called the New Champion Dialogues. The WEF’s globalist agenda fits well with the CCP’s 14th five-year plan for 2021 to 2025 because it also calls for a return to globalization.

Conference speaker Ma Jun, chairman of the Green Finance Committee of the China Society for Finance and Banking, delivered a speech on protecting biodiversity. He said that “central banks and financial regulators must take measures to guard against related risks … mobilizing private capital to protect nature and avoiding funding activities damaging to nature.”

WEF calls for economic and financial actions are generally advocating social control. Basically, what Ma is saying is that companies that don’t comply with the globalist agenda will be cut off from borrowing.

In another speech, Gim Huay Neo, managing director for the Center for Nature and Climate at the World Economic Forum, said, “Unlocking the power of nature financing has to come from two aspects: ecological protection and wealth creation.”

Wealth redistribution parallels the WEF’s war on income inequality. This utopian idea of global income equality would require every person on Earth to earn the global per capita gross domestic product, which is about $12,000 annually. For that to happen, citizens of developed countries would have to be stripped of nearly all of their wealth and reduced to an income of $240 per week. Furthermore, investment bankers, research scientists, heart surgeons, engineers, taxi drivers, and shop assistants from the Democratic Republic of the Congo to the United States and Switzerland would all have to earn the same wage.

The usual WEF forum held in Davos, Switzerland, was canceled last year and delayed this year because of COVID-19. Now that COVID-19 restrictions are easing, globalism is getting back on track. This year’s WEF regular conference ran from May 22 to May 26. According to its mission statement, the WEF seeks to remake nearly every aspect of modern society.

“The Forum engages the foremost political, business, cultural, and other leaders of society to shape global, regional, and industry agendas.”

The annual WEF meeting featured panel discussions on a range of issues, including augmented reality; central bank digital currencies; climate transition in emerging economies; crypto’s carbon footprint; the digital economy; diversity, equity, and inclusion; economic sanctions; employment in the Fourth Industrial Revolution; energy transition in China; environmental, social, and governance (ESG) indexing; geopolitics; a global tax; pandemic health care; responsible consumption; returning nature to cities; and Russia, as well as a special address by the president of Ukraine, Volodymyr Zelenskyy. These topics touched on every aspect of our lives, from how our government tracks us to what we’ll be permitted to eat and how often we can shower.

One of the WEF’s social engineering agendas, which is masked by an economics focus, is a push for stakeholder capitalism. The WEF claims that stakeholder capitalism is intended “to benefit all stakeholders and the environment rather than just shareholders.” From a legal standpoint, publicly traded companies are already obligated to act in the best interest of shareholders. They shouldn’t be acting in the best interest of or at the behest of nonshareholders or the edicts of the WEF.

The profit motive encourages companies to innovate and cut costs while inventing new and improved products. Successful companies have greater earnings and hire more workers. The constant drive for improvement and increased revenue creates meaningful, well-paid work for citizens. This encourages young people to attend university and improve their qualifications, resulting in a better-educated population.

Forcing companies to comply with WEF social dictates will drive down profits, eliminate incentives, and lower living standards across the board.

The forum also believes that when determining a firm’s creditworthiness, rating agencies should consider environmental risks and ESG issues in addition to the balance sheet. This is contrary to the very core of the lending industry. The way our financial system works is that we, the households, deposit our money in the bank, and the bank pays us interest. The bank can maintain our balance and can afford to pay interest because they only loan money to creditworthy borrowers.

Historically, who can and can’t borrow has been determined by creditworthiness and not a CCP-style social-credit score. Incorporating ESG ratings will cause banks to reject creditworthy businesses that don’t meet the WEF’s definition of ESG. Conversely, it would encourage banks to loan to companies with high ESG scores but a low probability of being able to repay. This will reduce investment, restrict the economy, and cause unemployment. If we’ve learned anything from the 2008–09 housing crisis, it’s that creditworthiness must be the primary—if not only—determinant of how loans are allocated.

Additionally, the failure of the Soviet Union and other communist countries, paired with the lack of personal freedoms in China, Cuba, and North Korea demonstrate that free-market capitalism—combined with multi-party democracy, free speech, and guaranteed property rights—results in the highest standard of living and the greatest amount of freedom and upward mobility for populations.