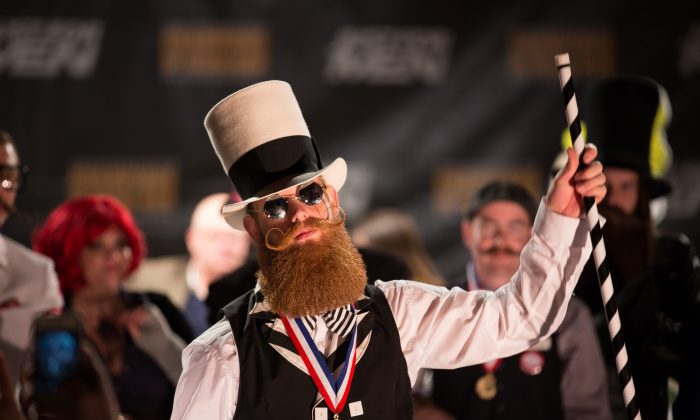 Jeffery Beard displaying his medal at the 2012 Beard and Moustache Championships in Las Vegas. (Courtesy of Ian Smythe)
Social Media

“If I were a woman I would kiss as many of you as had beards that pleased me, complexions that liked me and breaths that I defied not” — William Shakespeare

“The scruffier your beard, the sharper you need to dress” — Ashton Kutcher

“The basic thing a man should know is how to change a tyre and how to drive a tractor. Whatever that bearded dude is doing on the Dos Equis beer commercials sets the bar. That’s your guy. Every man should be aiming to be like him. The beard is just the tip of the iceberg” — Timothy Olyphant

“You cannot grow a beard in a moment of passion” — G. K. Chesteron

“All the men in my family were bearded, and most of the women” — W.C. Fields

“‘Upon shaving off one’s beard.’ The scissors cut the long-grown hair; the razor scrapes the remnant fuzz. Small-jawed, weak-chinned, bug-eyed, I stare at the forgotten boy I was.” — John Updike

“You can’t grow a beard if you shave” — Bob Blue

According to the World Beard Day website, “It’s that special time of year again! World Beard Day is finally almost upon us, and bearded men everywhere are preparing for a well-deserved day of joyous festivities, leisure and relaxation.”

“On the 6th of September 2014, hirsute men and women around the world will hold thousands of World Beard Day events in bars, backyards, lounge rooms, beaches, parks and public squares,” it says. “Beard-appreciators on every continent are encouraged to organise their own World Beard Day event, which can be as simple as inviting a few bearded friends, neighbours or strangers over to your house for a day of fun, celebration and unity (between bearded people).”