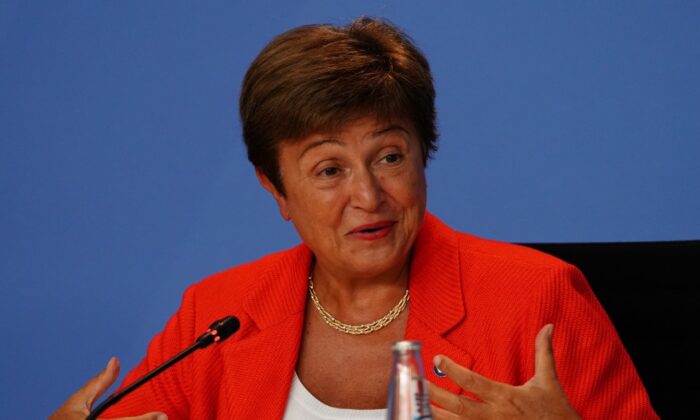 Managing Director of the International Monetary Fund (IMF) Kristalina Georgieva speaks during a press conference as she meets with economic and financial organizations in Berlin at the German chancellery on Aug. 26, 2021 in Berlin, Germany. (Clemens Bilan - Pool/Getty Images)
International Relations

World Bank leaders, including then-Chief Executive Kristalina Georgieva who is now the managing director of the International Monetary Fund (IMF), applied “undue pressure” on staff to boost China’s standing in the bank’s “Doing Business 2018,” according to an investigation related on Sept. 16.

The report (pdf), prepared by outside law firm WilmerHale at the request of the World Bank’s ethics committee, implicates Georgieva and then-World Bank President Jim Yong Kim, and casts a spotlight on China’s influence at the institution.

China’s ranking in the 2018 report, released in October 2017, should have been seven places lower, at 85th rather than remaining at 78th, the lender said in a review released in December 2020.

The report found the country’s boosting appeared to be “the product of two distinct types of pressure applied by bank leadership on the Doing Business team.”

It said Georgieva and a key adviser had pressured staff to “make specific changes to China’s data points” and boost its ranking at a time when the bank was seeking China’s support for a big capital increase.

Georgieva said she disagreed “fundamentally with the findings and interpretations” of the report and had briefed the IMF’s executive board. Two years ago, Georgieva left the World Bank and became head of the IMF.

In response to the findings, the World Bank has decided to abandon the “Doing Business” series entirely, according to a statement released Thursday. The lender said the report “raised ethical matters, including the conduct of former Board officials as well as current and/or former Bank staff.”

The U.S. Treasury Department, which manages the dominant U.S. shareholdings in the IMF and the World Bank, said it was analyzing what it called the “serious findings.”

The report said that the push to boost China’s score came at a time when Bank management was “consumed with sensitive negotiations” over a major capital increase, and when Chinese officials approached senior World Bank officials over concerns about the country’s score.

Georgieva told WilmerHale investigators that “multilateralism was at stake, and the Bank was in ‘very deep trouble’ if the campaign missed its goals,” the report said.

The World Bank in 2018 announced a $13 billion-paid in capital increase that boosted China’s shareholding stake to 6.01 percent from 4.68 percent.

In 2017, Chinese officials repeatedly told Kim and other senior World Bank officials that the 2017 Doing Business report failed to reflect China’s reforms, according to the report. The “Doing Business” report ranks countries based on their regulatory and legal environments, ease of business startups, financing, infrastructure, and other business climate measures.

One month before the report’s release, Chinese officials intensified their campaign, the report noted. In a dinner between Georgieva and a Chinese official on Oct. 14, 2017, he emphasized CEO Georgieva’s role as the “responsible person” at the Bank to “ensure” China’s reforms were acknowledged in the report, WilmerHale said.

When the draft 2018 report showed China dropping eight places to 85, senior staff from Kim’s office convened a meeting with the Doing Business leadership to discuss methodological changes to boost China’s ranking, including incorporating data from Taiwan and Hong Kong into the mainland’s score, the WilmerHale report said. That approach, however, was later scrapped for political reasons.

Georgieva later became personally involved, and in an Oct. 18, 2017 meeting said she was now overseeing the issue. During this meeting, she chastised the Bank’s then-China director for “mismanaging the Bank’s relationship with China and failing to appreciate the importance of the Doing Business report to the country,” the report said.

Georgieva asked a “Mr. Djankov” to guide the Doing Business report to final publication, and he worked with the unit to “identify changes to China’s data that would raise the country’s score,” the WilmerHale findings showed.

After Georgieva was informed of the changes, she thanked a staff member for doing his “bit for multilateralism,” the report found. She also visited the home of a Doing Business manager to pick up a hard copy of the report that reflected China’s new ranking, thanking the manager for helping to “resolve the problem” with China, WilherHale said.

The report said that staff on the Doing Business team knew the data changes were inappropriate but “felt that they could not challenge an order from the Bank’s president or CEO without risking their jobs.”