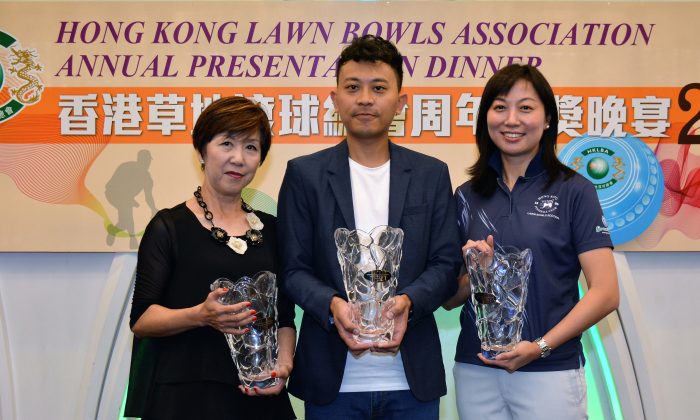 Lawn Bowls—Bowler of the Year
By Claudius Lam
biggersmaller
Print

The awards were presented at the Annual Prize Presentation Dinner organised by the Hong Kong Lawn Bowls Association last Friday, May 29.

Wong Chun Yat
Wong, who represented Kowloon Bowling Green Club in most part of last season and transferred to Craigengower Cricket Club at the end of last year, won the National Pairs with his KBGC clubmate Terrence Lee and got through to the quarter-finals of the National Singles. He gained 35 points throughout the year, five points more than Lee, who finished second.

He is particularly happy to regain the BOTY after a quiet year last year: “When I first won this in 2012, I never thought of winning it again, especially when I didn’t have good results last year. In 2014 I decided to have a go again and fortunately, I won the last competition of the year to take the title.”

Wong also set sight on his third BOTY award this year, after progressing to the semi-finals of the National Triples and the final of the National Pairs, “I feel that I have improved over the last few years so I will try my best to take it this year.”

Rita Tsui
Tsui, who was formerly with the Hong Kong Football Club and transferred to Club de Recreio last year, was level on 32 points with Yu to share the BOTY award. She won the National Pairs and was a semi-finalist of the National Triples last year.

Tsui was ecstatic after the win: “I never thought about the BOTY award before the season and just maintain my concentration at my games throughout. I just tried my best in every match and I am glad that it materialised.

“I started lawn bowling eight years ago, but it was not until the last two years that I could dedicate more time to it. I am really happy with my achievement so far and I look forward to further improve my skill,” said Tsui.

Bowler of the Year criteria
Operating on a points system, players were awarded points for each game that they won at the four elite national competitions – namely the Singles, Pairs, Triples and Fours, as well as the Hong Kong Bowls Classic. The player with the highest accumulation of points during a year will be the Bowler of the Year.