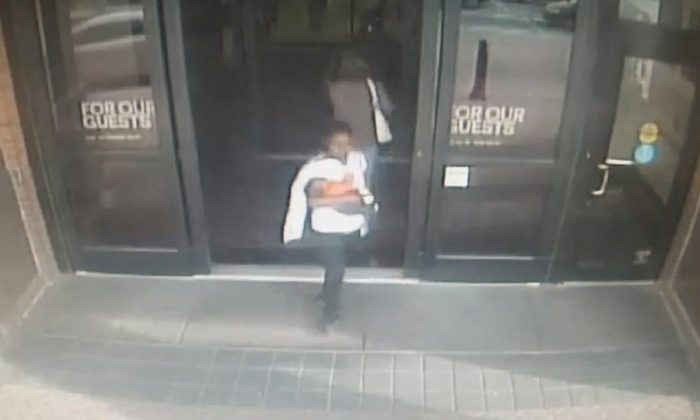 The woman fled the Philadelphia mall after taking the baby around 5:45 p.m. Thursday (UPPER MERION TOWNSHIP POLICE)
US

Police have arrested a woman for allegedly abducting a 7-week-old baby boy from the food court area at the King of Prussia Mall—about 20 miles northwest of Philadelphia on Thursday evening.

Ahsir Simmons, was snatched by a woman who authorities identified as Cherie Amoore, at around 5:45 p.m.

Amoore, 32, has been charged with Kidnapping of a Minor, Unlawful Restraint, False Imprisonment, Interference with the Custody of a Child, Concealment of the Whereabouts of a Child, and other related charges, according to WPVI.

Police said the baby was found safe and in good health, hours after the abduction.

According to authorities, the baby’s mother was sitting with the suspect in the food court and got distracted from dealing with other children and when she turned back, Amoore had already taken off with the baby.

She began to chase the kidnapper, but lost sight of her when she went to check on her other son, who was also sitting at the table.

I don’t know why I did it. I can’t explain it.
— Cherie Amoore

According to police documents, Amoore told detectives she gave birth to a boy on Feb. 11, but the baby only lived a few hours, and she never told anyone the child had died.

Police have not been able to confirm that pregnancy, but friends of Amoore tell Action News they were skeptical she was pregnant, WPVI reported.

The kidnapper then told police, “I don’t know why I did it. I can’t explain it. I held him and all those feelings rushed back. I just wanted my baby. I felt like I was holding my son again. It felt so good. I didn’t want to lose that feeling. I was crazy. I never intended to do anything like this.”

In a police affidavit, she claimed it was like an “out of body experience.”

“We are happy to announce that the 7 week old was located in good health and is being reunited with his parents,” the Upper Merion Township Police Department wrote on Facebook.

The baby’s mother, Malika Hunter, said, “I would like to thank God for allowing my baby to come back. And, I want to thank the Upper Merion Police Department, and everybody on social media that helped me get my baby back. I want to thank you so much.”