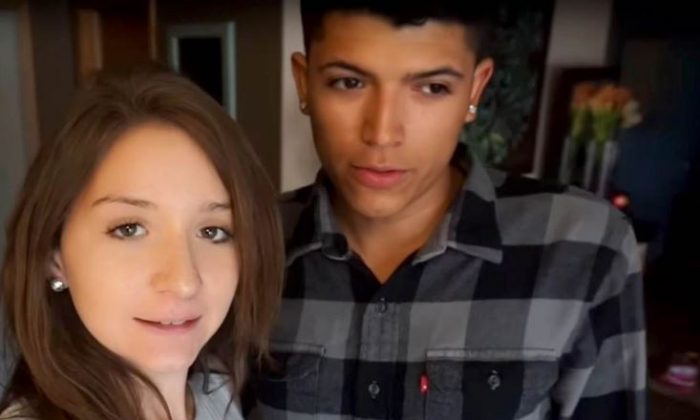 A woman has received a prison sentence after shooting her boyfriend dead in a YouTube stunt gone wrong.

The Internet stunt was meant to rocket Pedro Ruiz III and his girlfriend to fame but ended in Ruiz’s death.

Cameras captured the moment that Monalisa Perez, 20, pulled the trigger on a handgun aimed at Ruiz from just one foot away. Ruiz was holding a hardcover book to his chest in the mistaken belief that it would be enough to stop the .50-caliber bullet.

“We were doing a YouTube video, and it went wrong,” a transcript of the call quotes Perez, reported the Minneapolis Star-Tribune. “It’s all on recording.”

Perez pleaded guilty and was sentenced to two years, most of which is suspended for 10 years, leaving 180 days to be served in jail.

Judge Jeffrey Remick accepted the plea deal and ruled that Perez, who is the mother of two small children, can serve the sentence in 10-day increments in South Dakota, where she now resides. She previously lived in Minnesota. Between now and 2020, she must serve 30 days in jail each year by June 26, which is the anniversary of Ruiz’s death. After that, she can serve the rest through electronic home monitoring.

Norman County Attorney James Brue, made it clear the idea for the “foolish stunt” came from Ruiz, which was the reason for the short sentence, reported the Duluth News-Tribune. Brue told the court that the guidelines make an exception for cases in which “the offender played a minor or passive role in the crime.”

Woman who accidentally killed her boyfriend in a YouTube stunt sentenced to six months in jail https://t.co/mI77cFbkDd

Ruiz’s aunt, Paulita Ruiz, told Perez during the sentencing on March 14 that she was at fault for ending her nephew’s life.

“This comes from the heart, where you shot him,” she said during Monalisa Perez’s sentencing at the Norman County Courthouse. “You took him away from us, Mona.”

Family members said that they disagreed with the notion that it was Ruiz’s idea to try to pull off the stunt.

Perez, though, forwarded the idea just hours before the shooting on Twitter.

“Me and Pedro are probably going to shoot one of the most dangerous videos ever. HIS idea not MINE,” she wrote.

Me and Pedro are probably going to shoot one of the most dangerous videos ever?? HIS idea not MINE?

Ruiz later said that the death was a reminder of how foolish it was to set up the stunt just to get famous on the Internet.

The footage was never uploaded to Perez’s YouTube channel, which has 25,700 subscribers and featured the couple’s life and various pranks and stunts.

The video was submitted to law enforcement officials as evidence. The judge said he would say next week whether it would be made publicly available. Part of the ruling stated that Perez could not financially profit off of the video.

Perez was also prohibited from owning firearms for the rest of her life, and she was ordered to pay for Ruiz’s funeral.