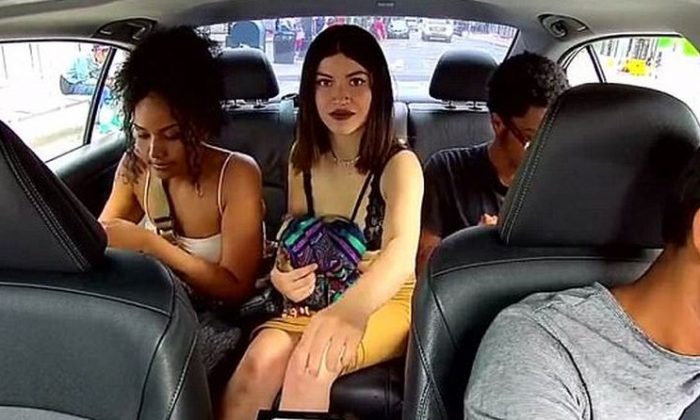 A female rider in an Uber car was caught on camera stealing from a driver’s tip jar, while brazenly looking into the car’s security camera.

The unnamed rider was with two others. When they got out she looked around as she grabbed dollars out of the jar.

The driver then looked down after the three got out, but it was too late. The woman who stole the cash can be seen rushing out.

MailOnline reported that the theft took place in New York City in August, and the driver said that he contacted Uber, but it said that it couldn’t do anything.

The publication later reported that the woman’s name is Gabita, and she’s 18 years old.

“We understand your frustration with this experience,” an email from Uber said. “We’ve attempted to contact the rider by phone and email, but haven’t been able to resolve this issue.”

The email added: “The rider responded to us and advised us that she didn’t steal your cash from the tip jar. If you believe the rider has your cash as captured from your dashcam and is refusing to return it, you may want to initiate a formal investigation via the police.”

The NYPD noted that it has no record of the theft, according to the New York Post.

The woman, however, cannot use Uber anymore—her account was deactivated.

“What’s been shown has no place on our app and the rider’s access to the app has been removed,” an Uber spokeswoman added to the New York Post.