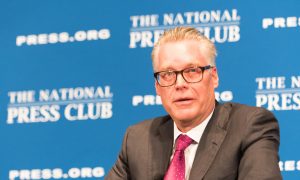 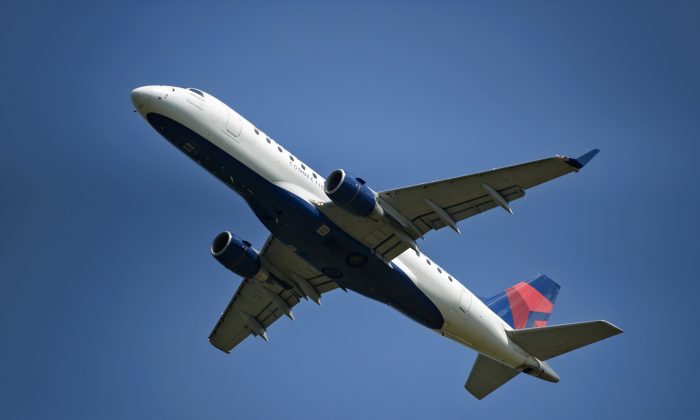 In this file image, a Delta jet is seen from Gravelly Point Park after takeoff from National Airport in Arlington, Virginia on July 24, 2015. (Brendan Smialowski/AFP/Getty Images)
US News

A woman managed to get on a Delta flight without identification or a boarding pass, a passenger has claimed.

The woman was traveling from Orlando, Florida, to Atlanta on Oct. 5. Delta and the Transportation Security Administration (TSA) are now investigating how it happened, according to news reports.

The passenger, who didn’t want to be named, told WFTV that the ID-less woman wouldn’t give up her seat.

“I also had a boarding pass for that seat, and she said—very bluntly, ‘I’m not moving,'” the passenger related to the ABC affiliate station.

A flight attendant was then called over and noticed the woman wasn’t on the flight’s manifest.

A supervisor and a pilot then attempted to remove the woman from the Delta flight, but she wouldn’t move.

The unnamed passenger then tried to recall the conversation between the woman and the flight crew.

“Well, I’m showing you a picture ID,” the woman reportedly told the flight attendant about the photo on her phone.

The crew eventually informed her that she was breaking federal law.

The Delta pilot then reportedly called the police, who removed the woman. The woman, whose identity was not disclosed, left the plane and cursed.

The passenger who spoke to WFTV was able to take her seat. But as the plane tried to take off from the airport, it was quickly stopped by the Transportation Security Administration (TSA).

“We were stopped pretty quickly, and the pilot explained it was because the lady was not cooperating with TSA, and she did not have a ticket to any airline at all,” the passenger recalled. “They could not figure out how she even got on the plane.”

Dogs and TSA agents then searched the plane, she said. “Every single passenger had a pat-down, and all of our bags were searched again,” the passenger noted.

Eventually, the plane was allowed to depart and made it to Atlanta, reports said.

It’s not clear how the woman was able to bypass TSA airport security.

The TSA said in a statement to Fox35: “The TSA can confirm that the individual was screened. We are working with law enforcement to investigate the incident at the plane and will not be providing any additional information at this time.”

Delta also issued a statement about the matter.

“Delta apologizes to customers of flight 1516 for the delay after a person not ticketed for that flight was removed from the aircraft. Security officials then directed precautionary rescreen[s] of everyone onboard. Delta is working with local law enforcement and the Transportation Security Administration on their investigation, and we are conducting our own review of this as well,” it told the Fox affiliate.