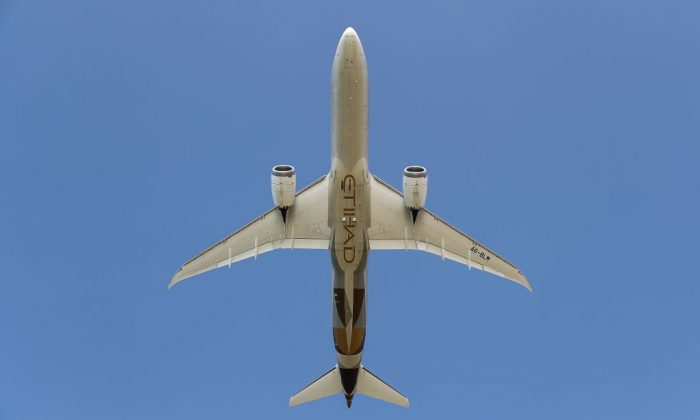 Woman Arrested After Body of Newborn Baby Found in Airplane

A woman has been arrested after the body of a newborn baby was found in a plane toilet by cleaning staff in Indonesia.

The Etihad flight from Abu Dhabi in the United Arab Emirates (UAE) on Sunday, Jan. 7, should have gone straight to Jakarta, Indonesia. But about four hours into the flight, a woman began to suffer from bleeding, forcing the captain to divert to Bangkok, where she was evacuated by a medical team, reported the Jakarta Post.

It was not until the plane had gone on to reach its final destination in Jakarta without her that airline staff realized the woman had given birth on the flight—when cleaners discovered the body of a full-term baby boy.

The woman was a 37-year-old from Cianjur in West Java.

She was identified by Indonesian police only as Hani, and was arrested when she arrived in Indonesia after catching another later flight from Thailand to Soekarno-Hatta airport in Jakarta.

“She didn’t look healthy and won’t be questioned until she is fit,” airport police chief Ahmad Yusef told AFP. “The woman is now at the airport’s health center.”

Yusef said that ground cleaners in Jakarta had found the body wrapped in a plastic bag in a drawer. He said that cause of death had not been established.

Police suspect that Hani secretly gave birth to the baby during the flight on the Airbus 380, which originally took off from Abu Dhabi.

Crewmember Francesco Calore told AFP, “The woman was in economy class but then laid on a business-class seat with an oxygen mask. The captain then announced we should divert to Bangkok.”

Calore said a medical team boarded the plane at Bangkok’s Suvarnabhumi International Airport, where she was taken off.

Hani had been working as a domestic servant in the UAE for four years.

She has a husband and child back in her home country of Indonesia, according to the Jakarta Post.

Hani admitted it was her baby and said that she left the baby in the bin because he was the result of a relationship with her employer in Abu Dhabi, claims the Post.

About 70 percent of the 5 million Indonesian citizens who work abroad are domestic helpers, according to Newsweek.