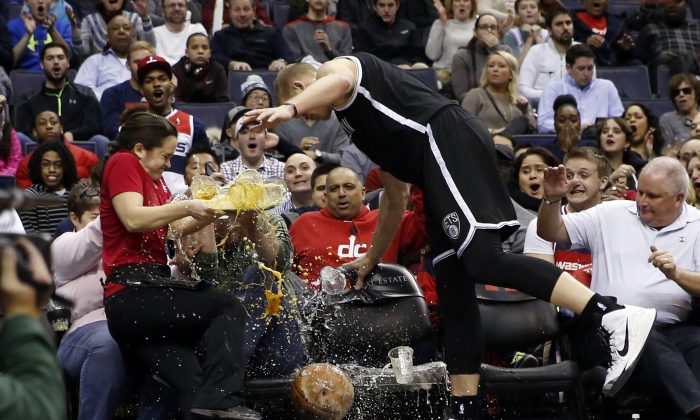 Waitress Deila Barr looses a tray of beers as Brooklyn Nets center Mason Plumlee (1) runs into her chasing the ball in the first half of an NBA basketball game against the Washington Wizards, Saturday, Feb. 7, 2015, in Washington. (AP Photo/Alex Brandon)
NBA

She was carrying a tray full of alcohol, including four Bud Lights and a Chardonnay. She saw the basketball bounce in her direction on the sideline, and stopped walking so she could try to kick the ball away from her.

“Then all of a sudden, I just see this giant white mass coming toward me,” she told the Washington Post.

That mass was Mason Plumlee, the Nets center who was chasing the ball and seemingly unable to stop his momentum. Barr tensed up, trying to protect the alcohol. But Plumlee reached out and shoved her, and the drinks spilled onto two courtside patrons.

“The way I spun, I just knew it was done,” she said. “And when I kind of stood up again, I’m just looking at my tray: it has one cup on it, and a soaking wet napkin, and everyone in the stadium was booing. I was like ‘Oh my God, that just happened.’ Because it was ridiculous, and it takes your brain a couple seconds to register — okay, all eyes are on me, and there’ s beer everywhere.”

Just minutes after the collision, Vine clips started circulating widely. The main view was shared the most but at least two others surfaced, too. Many fans derided Plumlee, who looked like he could have avoided the collision. He also looked angry afterward, and didn’t say anything to Barr.

“He kind of was a little brat about it; he threw his arms up in the air and stormed off,” Barr said. “I’m sorry. I didn’t know that impacted your life so much. But he played at Duke, so what do you expect?”

The fans who had beer spilled on them received gift bags with Wizards gear, while Barr had to finish her shift in the same uniform after she failed to find a replacement.

“It was just so gross,” she said. “It was like waking up on a Sunday morning in college when there’s just that stale beer smell from beer pong everywhere. That’s what it was like.”

Barr’s next game is when the Cavaliers play at Verizon Center on February 20.