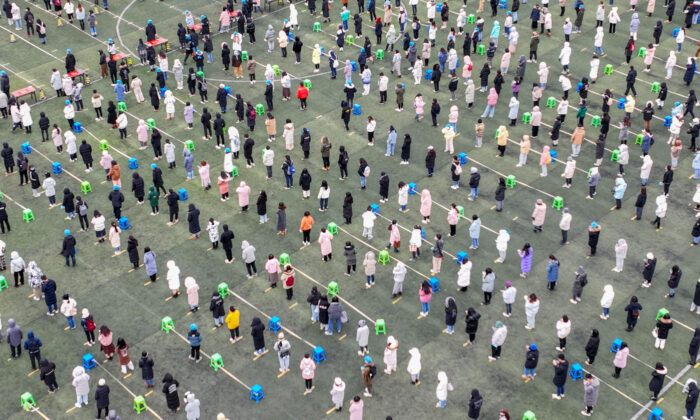 Aerial view of people queuing up for COVID-19 nucleic acid testing in Tianjin, China, on Jan. 20, 2022. (VCG/VCG via Getty Images)
INSIDE CHINA

A large number of newly registered PCR testing companies have sprung up in a short period of time in China due to the ruling Chinese Communist Party’s (CCP) enforcement of a strict zero-COVID policy that requires mass PCR testing on a regular basis.

However, along with the surge, there have been increasing reports of companies offering fraudulent services.

On June 28, several people from Beijing Jinzhun Medical Laboratory Co., Ltd. were arrested by Beijing authorities. Since May, three institutions in Beijing have been officially targeted for investigation on “suspicion of obstructing the prevention and treatment of infectious diseases,” and 11 people arrested.

The alleged crimes of these companies include: incomplete laboratory traceability records, unclear procedures for handling record, an inability to provide original specimen information and original PCR test records, inconsistencies in the number of test results issued by laboratories with their internal records, and violations of government regulations.

Officials from the Beijing Health Commission said that the above-mentioned illegal operations affected the accuracy of PCR test results, resulting in delayed detection of those who are positive for COVID-19 and an increased risk of further COVID-19 infections.

Some communist officials are also under investigation amid suspicion of their protecting problematic PCR testing companies.

On May 27, the Beijing Disciplinary Inspection Commission of the Chinese Communist Party announced that Yang Daqing, deputy director of the Health Committee of Fangshan District, Beijing; Jin Changhao, chief of the medical and political department; and Xing Man, the third-level chief member of the medical and political department were suspected of “serious violation of discipline and law” when supervising and managing the Beijing Pu Shi Medical Laboratory. They are being investigated by the Disciplinary Committee of Fangshan District.

At present, there are about 2,400 medical testing institutions in China, of which nearly 40 percent have been established within the past three years.

The Soochow Securities Co., Ltd., research team issued a document saying that if normalized as government policy in the future, to be implemented in all first- and second-tier cities in China, the monthly cost of PCR testing will reach up to 121.2 billion yuan ($18.1 billion), or about 1.45 trillion yuan ($220 billion) per year—representing a hugely profitable potential new industry.

Take Zhongtong Lanbo as an example. Its parent company China Isotope & Radiation Corporation’s 2021 annual report stated that the company will achieve rapid revenue growth in 2021, reaching historic highs for the company. The company achieved an operating income of 5.144 billion yuan ($800 million) last year, a year-on-year increase of 20.3 percent; and its independent medical laboratory services achieved revenue of 228 million yuan ($34 million), a year-on-year increase of 77 percent, accounting for 4.4 percent of the company’s total revenue.

In the first quarter of 2022 alone, the company made the same amount as it did for the whole of 2021.