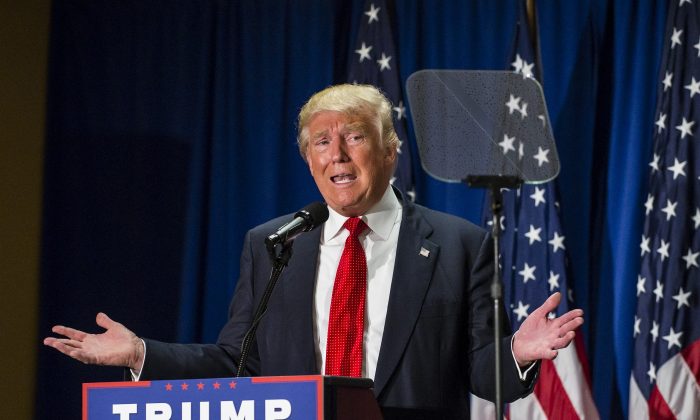 With Embrace of Teleprompter, Trump Sees Bounce in Polls

Donald Trump’s reluctance to use scripted speeches and a teleprompter has evolved along with his campaign strategy.

The Republican presidential nominee has used a teleprompter in nearly all of his recent speeches. Previously, he relied on a piece of paper with talking points and his off-the-cuff speaking style.

In the primary season, he made his disdain for teleprompters clear.

“I’ve always said, if you run for president, you shouldn’t be allowed to use teleprompters,” Trump said last October. “Because you don’t even know if the guy is smart.”

He has also taken issue with Hillary Clinton’s use of the teleprompter, saying that it makes her look robotic and less presidential.

Trump’s embrace of technology coincided with changes in his campaign, notably the hiring of Republican pollster Kellyanne Conway as campaign manager and Breitbart co-founder Stephen Bannon as the campaign’s CEO, who are both experts in messaging.

Since Conway and Bannon assumed control over the campaign last month, they have been able to turn their candidate, notorious for controversial remarks, into a mostly on-message candidate—something that Trump’s previous campaign chairman Paul Manafort was unable to accomplish.

During his stint on the Trump campaign, Manafort had trouble convincing Trump to stick to the message, despite calls from high-ranking Republicans such as Senate Majority Leader Mitch McConnell (R-Ky.) for Trump to “stay on script.”

In his recent speeches, Trump has mostly attacked his Democratic counterpart Clinton and has targeted different groups with specific messaging, without falling into the frequent controversies that marred the Republican primaries and his first few weeks in the general election.

Trump’s focus on message, along with negative press about Clinton—from her treatment of Clinton Foundation donors, to her ongoing email scandal, to her health, to her comments on Sept. 9, when she described half of Trump’s supporters as “deplorables”—has seen a tightening race.

After the Democratic National Convention at the end of July, Trump fell to his lowest point in the polls, but has been slowly rebounding in September.

Clinton has gone from showing a seven-point lead over Trump in last months’ Quinnipiac four-way poll, down to a two-point lead by the same polling company, in results released on Sept. 14.

Trump supporter Newt Gingrich told Fox News on Sept. 6 that he predicted the race would get better for the candidate, “to the degree that Trump stays focused, sticking with the teleprompter, which he does as well as anybody I’ve ever seen, and he’s making his points, and he’s coming across very, very effectively.”

While Conway has mostly focused on the way the campaign’s messages are presented to the media, it appears to be Bannon who works closely with Trump on his speeches.

Bannon, who has kept a low profile since his appointment as campaign CEO, works closely with Trump on a regular basis, according to Washington Post reporter Robert Costa.

“[Bannon’s] been operating really quietly behind the scenes,” Costa said on MSNBC’s “Morning Joe” on Aug. 31. “So you have Bannon as his operator who’s at Trump’s side but not making any kind of public name for himself.”

Trump’s use of the teleprompter has made him more of a traditional political candidate than when he was running in the Republican primaries. With a strategy of mixing traditional and non-traditional means of campaigning, Trump looks to appeal to the largest number of Americans—and that means using a teleprompter.