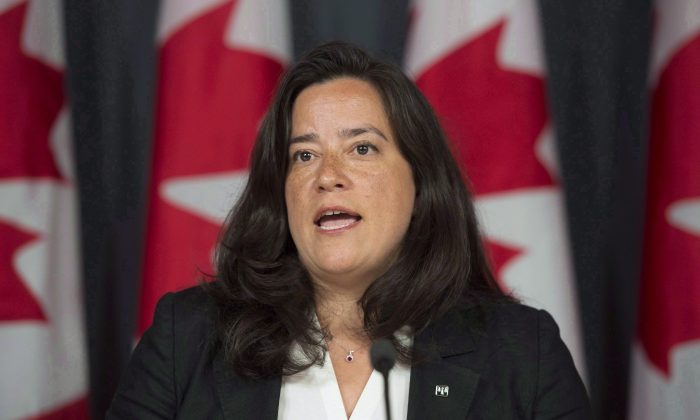 OTTAWA—Former justice minister Jody Wilson-Raybould angered senators by refusing to give testimony on a change to the Criminal Code that is now at the centre of allegations that she was improperly pressured to help SNC-Lavalin avoid criminal prosecution.

The Criminal Code amendment was stuffed into an omnibus budget implementation bill last year and got little scrutiny from MPs on the House of Commons finance committee.

But when it got to the Senate, the upper chamber’s legal and constitutional affairs committee was tasked with scrutinizing the provision, which allows prosecutors to negotiate remediation agreements, a kind of plea bargain, in cases of corporate corruption.

The committee held extensive hearings last May and heard from an array of expert witnesses, including Justice Department officials, who suggested that some questions were best put to the minister of justice. The committee invited Wilson-Raybould but she did not show up. In her stead, the government sent her parliamentary secretary, Liberal MP Marco Mendicino, and Public Services Minister Carla Qualtrough.

“It’s very unusual to study a bill, especially in the criminal domain, and to not have the minister responsible appear before the committee,” Conservative Sen. Pierre-Hugues Boisvenu observed at the time. “I would like to know why the minister of justice is not here herself.”

Qualtrough said it was her “understanding” that Wilson-Raybould “wasn’t available.” Qualtrough, who is responsible for the government’s broader corporate-integrity agenda, acknowledged that she was “not technically, obviously, representing Justice,” but nevertheless “felt myself capable to offer you some perspectives on our government’s position on these matters.”

Senators on the committee were sufficiently miffed by Wilson-Raybould’s no-show to make an “observation” about it in their final report: “The committee notes it did not have the opportunity to hear the testimony of the minister of justice on the proposed amendments that are under her ministerial mandate, although she was invited to appear.”

Independent Liberal Sen. Serge Joyal, the chair of the committee, said in an interview that he actually spoke to the government’s representative in the Senate, Peter Harder, to see if he could persuade Wilson-Raybould to appear at the committee—to no avail.

“The members were rather frustrated by that,” he said.

Joyal said the recent controversy over Wilson-Raybould’s role in the SNC-Lavalin case puts her refusal to testify in a different perspective.

“Now, of course, in retrospect … I can understand that she might not have been at ease with the overall issue of remediation agreements and didn’t want to submit herself to questions in relation to that.”

Wilson-Raybould, who was demoted to the veterans-affairs post in January, resigned altogether from cabinet on Feb. 12. That followed an anonymously sourced newspaper article that alleged she was improperly pressured by the Prime Minister’s Office last fall to instruct the director of public prosecutions to negotiate a remediation agreement with SNC-Lavalin rather than pursue a criminal prosecution that could cripple the company.

Wilson-Raybould has thus far refused to comment on the allegation, citing solicitor-client privilege. Prime Minister Justin Trudeau has denied there was any undue pressure and insists he specifically told his minister the decision whether to prosecute was hers alone as attorney general.

The budget bill was not the only time Wilson-Raybould snubbed the Senate’s legal and constitutional affairs committee. Throughout last fall, the committee tried repeatedly to get her to testify on the government’s access-to-information reforms—specifically on a provision that would require judges to publicly disclose their expenses, which some senators fear could undermine judicial independence.

Joyal said Wilson-Raybould “systematically” refused repeated invitations to testify, even though the committee offered to be flexible on the timing to accommodate her schedule. The only response it received was that the minister was unavailable, he said.

“We’re having a great deal of difficulty scheduling the minister’s appearance before our committee,” Boisvenu remarked during an Oct. 3 committee meeting. “It’s a habit of hers.”

Unlike the budget bill, on which the committee was under pressure to report by a specific deadline, Joyal said he warned Harder that in the case of the access-to-information bill, the committee would sit on the legislation until it heard from Wilson-Raybould. “No minister, no bill.”

Indeed, he said the committee was on the point of passing a motion to that effect when Wilson-Raybould was shuffled out of the justice portfolio in January. Within two weeks, he said, her successor David Lametti agreed to testify. He is now scheduled to appear on Feb. 14.

Wilson-Raybould has appeared before the Senate on other bills, notably those on medical assistance in dying and legalization of cannabis. But her selective approach to which bills she chose to defend publicly raises potential questions about cabinet solidarity.

Joyal, who served as a minister in the cabinets of Pierre Trudeau and John Turner, said disagreements are common around the cabinet table. But once a consensus decision is made, every minister is required to stand by it, whether or not he or she personally agrees with it.

In the case of a minister who personally disagrees with a bill that falls under his or her responsibility, Joyal said: “If the decision of the government is to proceed with the bill, you have no choice than to stand by the bill. And if you don’t want to stand by the bill, well, the option is to resign from the portfolio. It’s quite clear.”