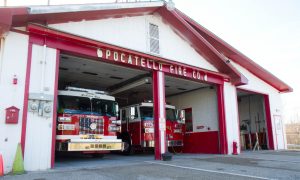 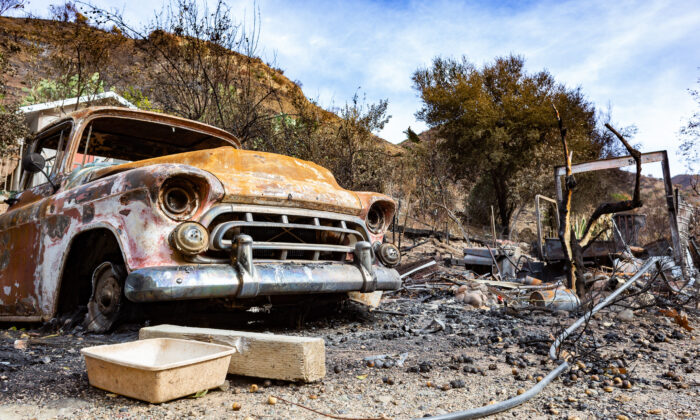 With mudslide season approaching, fire victim Susan Iwamoto is making an urgent plea to the County of Orange as well as California state and federal authorities to help struggling residents in what she calls “the lost canyon.”

Iwamoto, 56, and her husband, Wayne, 69, have been living in their ash-and-soot-filled home in Williams Canyon since the Bond Fire hit in early December. They have no other options.

Short-term rentals are in short supply, and Red Cross housing vouchers have been taken by those in need amid the pandemic.

Orange County Supervisor Don Wagner told The Epoch Times on Dec. 21 that he’s doing all he can to round up and deliver resources quickly ahead of the winter mudslide season. Heavy winter rains could bring another blow to the already devastated community.

Wagner ordered 10,000 sandbags to be deployed to protect homes and roads from slides. The county is also removing debris from streambeds to prevent flooding.

“I understand their frustration, and we are looking for those resources. … I was out there this morning to help with the distribution of sandbags,” Wagner said.

The county has been looking into temporary housing options, such as trailers. But even if there are trailers available, Wagner isn’t sure of their condition or how long it would take to deliver them to Williams Canyon.

“The old trailers the cities were using for the homeless are really pretty beaten up,” he said. “They were not very well maintained by the homeless.”

He said he would look into her concerns. “I know the federal government was out there last week taking a look at the canyons, and there is a [Watershed Emergency Response Team] WERT report that’s supposed to be done. It hasn’t been finished yet,” he said. “So, maybe that’ll give us a little bit more information as to what structures were damaged.”

Before the fire, Iwamoto said Williams Canyon was home to about 40 families. To her knowledge, nine homes burned down and 12 were damaged, along with dozens of other sheds, greenhouses, other agricultural outbuildings, and farm equipment.

Iwamoto is also worried that the damage suffered by her and her neighbors won’t get much attention, because their community is a small one amid the larger communities of Modjeska and Silverado canyons, which were not hit as hard by the blaze.

“Those are big canyons, more populated. We are the smallest populated canyon with the least resources,” Iwamoto said.

Cars for Vets Burn Up in Blaze

To add insult to injury, 10 brand new KIA cars that were stored on Iwamoto’s property for the Purple Heart Foundation’s Cars Helping Veterans program were also lost in the fire.

Iwamoto said the cars would have likely raised more than $200,000 for veterans in need.

Mike Derkson, a spokesman for the Purple Heart Foundation, said the organization was grateful for the donation of the KIAs, which would have been sold to raise funds for veterans in need of housing, medical assistance, medication, or schooling.

Although disappointed to lose the cars, Derkson is grateful no one was killed in the blaze. In the previous Santiago fire—a close call for Williams Canyon residents—he helped move people, animals, and the cars out of the area. But there was no time to save the vehicles from the Bond fire.

“It is unfortunate … but at the end of the day, it was more important to help everyone there than to worry about cars. That’s really what it’s about,” he said.

The Day of the Fire

As the fire quickly spread on Dec. 2 and 3, Williams Canyon residents went door to door warning their neighbors to get out or risk perishing along with their homes and belongings. Many residents barely escaped and left with only the clothes they were wearing, Iwamoto said.

But Iwamoto, her husband, and a neighbor chose to stay.

“We had damage to our home. We were really, really lucky. My husband had a 300-foot fire hose sitting in our driveway, and we had a fire hydrant out front, and that saved us. We didn’t evacuate,” she said. “We were the only ones that stayed … and actually helped put out spot fires.”

“So many animals died because they didn’t have time to get them out,” Iwamoto said as her voice broke and she began to cry.

The fire victims in Williams Canyon say they’ve been told by their insurance providers not to clean up their properties until inspectors arrive to survey the damage. In the meantime, some are forced to live in their damaged and dirty homes.

Morgan Dunn, 50, who lost his home and guest house in the blaze, said he’s been told to leave his property untouched until he can get contractors in to bid on cleanup and reconstruction. “My bids are going to be three times what my coverage is,” he said.

Both Dunn and Iwamoto have the California Fair Access to Insurance Requirements (FAIR) Property Insurance Plan, which was established in 1968 to help homeowners and tenants who are unable to obtain insurance on the free market to get basic coverage.

Iwamoto said, “We’re waiting for the FAIR plan to approve and process claims, and we were told not to clean up. So we’re literally living in our home breathing ash and soot. Our dogs, who are white Great Pyrenees, are gray now because the outside is full of ash and soot.”

“We have nowhere to go. There is no short-term housing. So our only choice is to stay in our home with the ash and soot, which is supposedly toxic,” she said.

Iwamoto said she was told by insurance companies that they were overwhelmed with claims, and she was told by county staff that she would have to be patient because of Christmas. “You have no idea how hard that is to hear. We were disgusted,” she said.

Wagner empathized with residents forced to rely on insurance companies.

One family is living in a house with a massive hole in the roof, and another is facing the threat of a 4,000-gallon water tank that slid down the hill and could come crashing through their walls, Iwamoto said.

“It’s teetering on a tree that broke, and when the mudslides come, it will go right through the middle of their house. How do you get the resources to get it out when their insurance won’t cover it?”

Iwamoto said, “We need to know that when somebody says they’ve got our backs, that they really do.”

She said she’s emotional because she feels there’s an increasing call for big government, but she’s experiencing firsthand that you have to rely on yourself and your neighbors. “We live in an age of big government that wants to get bigger. And it’s frustrating how ineffective government is for a little tiny community like this.”

Iwamoto spoke of how the neighbors have come together amid the devastation. “I am honored to see the old-fashioned neighbor-helping-neighbor like I’ve never seen before in California. Most people in California don’t even know who their neighbors are … Not here. Neighbors save neighbors here.”

Most people in the area are self-employed or are elderly and living on fixed incomes, she said.

Iwamoto and three other residents have organized a Go Fund Me page to raise money for the community.

Residents of Williams Canyon have no cell phone service other than through Wi-Fi, so when the power is shut off, they can’t make phone calls unless they have a landline, and even then, there is no guarantee, they say.

The power was shut off when the fire struck.

“The problem is the landlines tend to go down when the power is cut off,” Wagner said. “That is an issue they have out there, and one of the reasons we’re working [with] Southern California Edison to see if there’s a way to fix that problem.”

Iwamoto said the findings of a 2019 Orange County Grand Jury report that dealt with emergency communications problems in the region seem to have fallen on deaf ears.

Edison spokesperson David Song told The Epoch Times earlier this month that the power outage shouldn’t have affected traditional landlines. But he said Edison is willing to work with phone carriers to address communications concerns in rural areas going forward.

Wagner said he would look into concerns about the “digital divide,” and whether Coronavirus Aid, Relief, and Economic Security (CARES) Act funds can be used.

“With so much schooling being done online nowadays, there are communities that don’t have quite the same access to the Internet essentially … and there has been some effort to fix that inequity. Maybe some of those funds can be repurposed. I’ll have to check. I’ve not gotten a report from our CEO budget office as to whether that’s doable, or if there’s any money left for that,” Wagner said.

The CARES Act funds are not generally meant for natural disaster relief, he said. Iwamoto, who used to work as a county economic developer in Missouri, said she has looked into it and she believes they could be used to help Williams Canyon.

The funds have all been allocated already, county officials have told The Epoch Times, though detailed accounting on the spending will not be available until the new year.

“There’s not a lot of CARES Act funding left, to be honest,” Wagner said. “I won’t say there’s none, but CARES Act [money] generally goes elsewhere.”