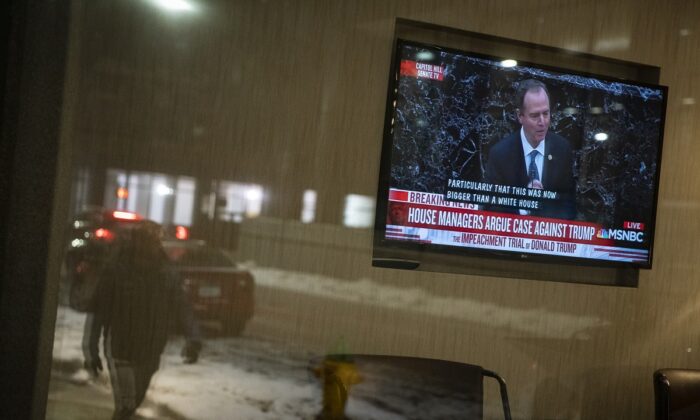 Given the hatred meter hovering around 25 on a scale of 1 to 10, will impeachment be renewed in President Donald Trump’s second term, possibly even dominate it?

It’s a question worth pondering if we accept the premise that the president will weather the current impeachment ordeal and eventually win reelection. And, at least for now, I do.

What then will Trump 2 look like? How many more impeachments and trials can we look forward to—a rather frightening concept, considering the mind-numbing torture by television we are undergoing at present?

Some of this will depend on Trump’s margin of victory. If his reelection mirrors his previous contest—a decent result in the Electoral College (302–227, counting two defectors) diminished by a popular vote loss of nearly 3 million, look out.

He’ll be branded “not democratically elected” by the left. Goodbye, “democratic republic.” The Electoral College, not to mention the president, will be under more serious assault than ISIS or al-Qaida.

This will be especially true if the Democrats hold the House and, worse yet, take the Senate. But the House alone spells trouble. As we know, they have the power to impeach and, as we also know, are willing to do so on almost any basis.

Close your eyes and you can already see the marchers in the streets, demanding the president’s impeachment, if not his resignation. This could continue unabated through 2024, with the attendant stasis in many aspects of government—zero improvement of infrastructure, zero trade progress, everyone at each other’s throat in a near civil war, even more than they are now.

This is an extreme scenario—and history could intervene as it often, or even usually, does—but it’s far from impossible.

What would ameliorate it to a significant degree would be a solid Trump victory—even greater in the Electoral College and something closer to a wash in the popular vote. (A true popular vote victory may be impossible for Republicans with California still part of the United States.)

It would also help immeasurably if the Republicans retake the House. That would put the kibosh on impeachment better than anything.

The GOP leadership and their rank-and-file know that well. But does that mean they can accomplish it?

The zeitgeist, however, points to the possibility of an overwhelming Trump victory. Here, in flyover country, people are sick unto the proverbial death with the impeachment pas de deux. They are only paying scant attention. You could even say, reversing the ’60s anthem, “The whole world is NOT watching!”

Impeachment, it feels here, but it’s Tennessee, is even having the opposite effect, driving people to Trump.

But then, all reactions at this point are only anecdotal. No doubt the pollsters are working overtime to tell us what we are thinking and what the future might hold. Nevertheless, remember this: Famed pollster Frank Luntz declared Hillary the victor in 2016 at 6 p.m. on the very night of Trump’s election.

Anything can happen. But if impeachment dominates American life for the next four years like it’s dominating it now, we might as well all move to … Oh, wait. There’s nowhere to go.