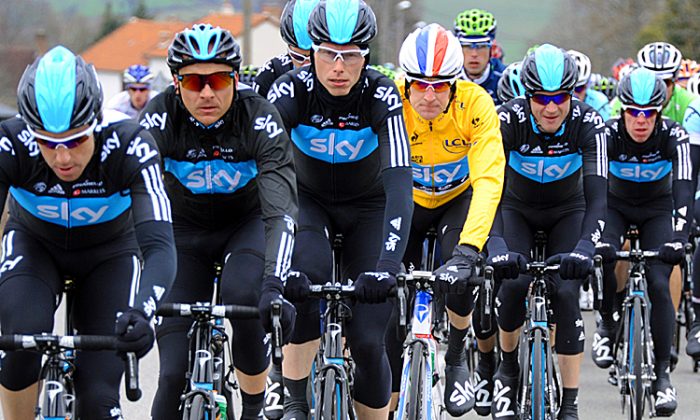 Wiggins Says Paris-Nice Will Be Decided on Col d’Èze

In an interview with NBC Sports after Stage Three of the 2012 Paris-Nice cycling race, race leader Bradley Wiggins of Sky Procycling laid out his thoughts and strategies, and said that the whole race would be decided at the final 9.6-km uphill time trial from Nice to Col d’Èze.

Wiggins started by explaining that though he was riding up front, he wasn’t interested in stage wins.

“I was just looking to stay safe and keep my eye on Levi [Leipheimer, in second place] and they guys closest around me so I did that. Alejando [Valverde] won his type of finish—he’s getting close in there as well.

“It was a full-on bunch sprint uphill so it was never easy—there was a lot of jostling. Fortunately I stayed upright and didn’t lose any time. It was another day down.

“The team rode fantastic today, it was in control. It was cold out there, so a lot of guys were just struggling to keep warm. Another day down, another day tomorrow.”

Wiggins is focused on the General Classification win, not stage wins—even keeping the leader’s yellow jersey isn’t a priority for the lanky Brit. Wiggins leads by only six seconds over Omega Pharma-Quickstep’s Levi Leipheimer, 11 seconds over the young American Teejay van Garderen of BMC, and 14 seconds over Omega’s Sylvain Chavanel. Alejandro Valverde, back in excellent form after a two-year suspension, is only 20 seconds back.

“These next couple of days we are going to try and control it as best we possible, but it is a strong possibility that we’re going to lose the jersey in the next few days, by a bonification here or there.” (A bonification is a time bonus given for winning an intermediate sprint or finishing on the podium.)

“If we can be in touching distance by Col d’Èze, this is to play for,” Wiggins concluded.

The stages can be viewed live online through a variety of sources, and are being televised, taped, in the United States on the NBC Sports network every afternoon.