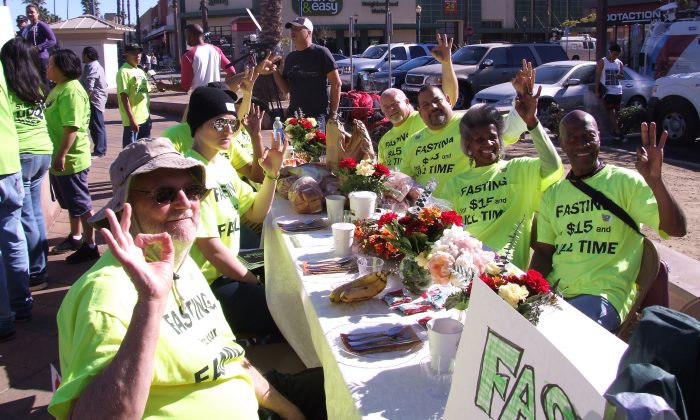 Walmart workers show the sign for employee labor group Organization United for Respect at Walmart (OUR Walmart) and break a 24-hour fast in Long Beach, Calif. on Nov. 28, 2014. Striking Walmart workers and supporters held protests for Black Friday this year calling for $15 an hour and consistent, full-time work. (Sarah Le/Epoch Times)
US

Why Walmart Workers and Supporters Held Protests on Black Friday

LONG BEACH, Calif.—A large rally of striking Walmart workers and people from other supporting organizations met at around noon at a Long Beach Walmart store on Black Friday.

Protestors held signs like “Respect Our Right to Speak Out,” “Pay Workers Enough to Feed a Family,” and “Hungry for Justice.”

The strikers are asking for $15 an hour and consistent, full-time work so that employees who want it are eligible for benefits. In addition, they also want Walmart to stop retaliating against employees who speak out or organize.

Twelve of the Long Beach Walmart workers had been there since noon on Thanksgiving Day and slept in a tent outside overnight.

They staged a 24-hour fast and candlelight vigil to protest workers being forced to work on Thanksgiving, and wages that they say are so low, some employees go hungry.

“The workers inside, they didn’t get to eat that Thanksgiving meal that people at home do, so we chose to do a fasting in support of that,” said 21-year-old Richard Reynoso, who has worked at Walmart in Duarte, Calif. for three years. He said he sometimes lives on peanut butter and jelly sandwiches, because he can’t afford much else.

He also said he has had his hours cut because of exercising his legal right to be a member of employee labor group Organization United for Respect at Walmart (OUR Walmart).

Venanci Luna, a department manager at Walmart in Pico Rivera, said she said had to choose between a two dollar an hour raise or participation in OUR Walmart.

“Which one would I choose?” she asked. “I would choose respect, because it’s free, and I know that I’m doing something right, not just for myself, but for my fellow workers who cannot speak because they’re so afraid.”

Long Beach resident and Walmart shopper, Miguel Chavez, had just spent about three hours and $450 inside the store on Christmas gifts when he saw the demonstrators. He said he was surprised to see the large group, but said honestly he probably wouldn’t think much about the strikers after today.

“They’re fighting for more money. Times are getting harder in life, so why not?” he said, adding workers shouldn’t have to work on Thanksgiving.

In a statement on Black Friday demonstrations, Walmart downplayed the protests as a union-backed stunt. “The crowds are mostly made up of paid union demonstrators and they are not representative of our 1.3 million associates across the country,” the company said.

It also said Walmart pays full and part time workers on average nearly $12 an hour and workers receive double pay for working on Thanksgiving, as well as a 25 percent discount on a basket of goods.

“Even with more associates scheduled to work than ever, fewer associates called out absent over the past day than we see on a typical day. That tells us our associates are excited to be there for our customers at this special time, and they are not joining in made-for-TV demonstrations in any meaningful way,” the statement said.

This is the third year Walmart workers have gone on strike on Black Friday, and with over 1,600 planned across the country, this was supposed to be the biggest year yet, according to OUR Walmart.

The hashtag #WalmartStrikers on Twitter showed protests across the country, including in Portland, Miami, Chicago and Philadelphia.

However Dan Schlademan, campaign director of Making Change at Walmart estimated on Friday afternoon in a press call that the number of strikers would probably in the hundreds by the end of the day.

Walmart is the nation’s largest employer, with ten percent of all American retail workers employed by the company. The retail giant is owned by the Waltons, the nation’s wealthiest family, and the company made about $17 billion in profit last year.

Yet that money is not going back into the communities where Walmart has its stories. According to a report commissioned by members of Congress last year, Walmart is actually a drain on the economy. A single Walmart store could cost taxpayers up to $1.7 million per year because employees rely on taxpayer-funded social welfare programs to make ends meet.

“Federal labor policy can play an important role in reversing these trends, stemming the growth in income inequality, driving up wages, and reducing taxpayer costs,” the report concluded.