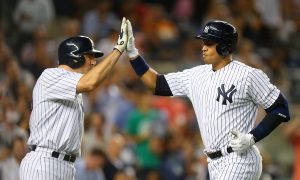 Why the Royals Had to Make the Cueto Deal

The Kansas City Royals, in an unusual move for the long-suffering franchise, are actually buyers during this summer’s annual trade deadline, and they already struck the biggest deal yet on Sunday, July 26, landing ace Johnny Cueto from the Cincinnati Reds.

The deal cost Kansas City, which leads the AL with a 59–38 record (through Sunday), three young left-handed minor league pitchers—John Lamb, Brandon Finnegan, and Cody Reed. Cincinnati should be able to plug Lamb and Finnegan into the middle or back of the rotation by next year and Reed could make an impact the year after. At worst, they could be valuable relievers for the Reds.

For the Royals, the move is out of the ordinary for a team and fan base that has seen former stars like Zack Greinke, Carlos Beltrán, Johnny Damon, and Jermaine Dye exit via trades over the years.

For the Royals, the move is out of the ordinary for a team and fan base that has seen former stars like Zack Greinke, Carlos Beltrán, Johnny Damon, and Jermaine Dye exit via trades over the years. Only the 2010 Greinke trade—which brought them shortstop Alcides Escobar and center fielder Lorenzo Cain—was a mutually beneficial deal as Kansas City was routinely fleeced in deals for their previous stars.

But trades like the Greinke one that added to the impressive farm system that the Royals had slowly developed under the era of Dayton Moore—Kansas City’s general manager since 2006—are also the reason that the Royals are very careful in dealing some of their valuable prospects for a two-month rental as in the case of impending free agent Cueto.

The Royals, a small-market team that will not be successful in trying to bid for top free agents on the open market, depend on their minor league system that most publications had ranked as the best in baseball back in 2011.

Most of that talent have already graduated to the major leagues and were largely responsible for their run to the World Series last year. Before the Cueto trade, Kansas City’s current farm system was generally ranked around the middle of the pack.

Although the Royals made the deal without sacrificing their top two pitching prospects—Sean Manaea and Kyle Zimmer—or top position prospect Raul Mondesi Jr., giving up a couple of potential down-the-road starters is still something of significance. Especially when you consider that they paid $32 million over four years for number-three starter Jason Vargas and $25 million for number-four starter Jeremy Guthrie.

But even though the players that make up Kansas City’s nucleus are mainly between 24 and 31 years old, a number of them are climbing the annual arbitration ladder and some tough payroll decisions will soon have to be made.

For instance, corner infielders Mike Moustakas and Eric Hosmer—who were instrumental in last year’s playoff run—will each receive raises of somewhere between $2 and $3 million after the season. That’s doable, but it only gets worse as each is set to be a free agent following the 2017 season.

Given that they’re both represented by Scott Boras—who’s notorious for advising against signing any team-friendly deals—the suddenly good Royals are staring at a two-year contention window and currently they don’t have comparable replacements for either of them in the minors.

A trio of projected middle-of-the-rotation starters is a very fair price to strengthen the team’s lone weakness.

That window of contention could be even shorter if 31-year-old Alex Gordon—the unquestioned leader of the team—bolts after the season. The four-time gold glove winning left fielder has a $12.5 million player option for next season, which is far less than what he could make on the open market.

Cueto, who finished runner-up in the NL Cy Young voting last season, shores up the team’s only weakness—starting pitching. Kansas is not only without an ace, but also don’t even have a legitimate number-two starter with the young and talented Yordano Ventura having an uneven season.

So with this being the Royals’ best shot at bringing home their second World Series title, a trio of projected middle-of-the-rotation starters is a very fair price to strengthen the team’s lone weakness.