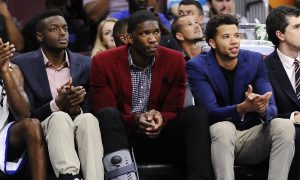 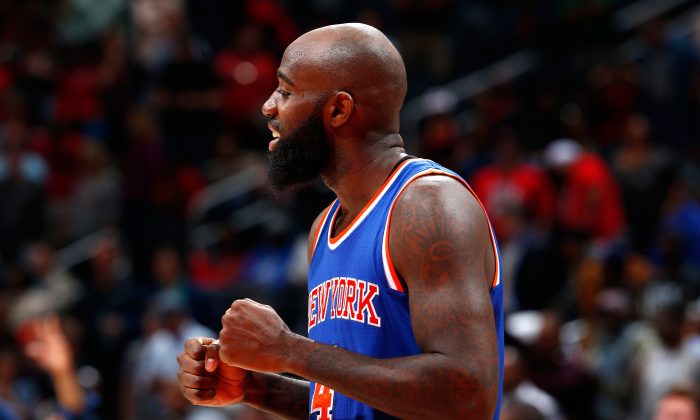 Quincy Acy and the New York Knicks will need plenty of help from their rookie class after a 17–65 mark in 2014-15. (Kevin C. Cox/Getty Images)
NBA

When the woeful New York Knicks surprised everyone by winning two of their last three games of the regular season to move out of the basement and into the second-worst record in the league, it worried an already-paranoid fanbase that hasn’t seen a title in more than 40 years.

How could the same team that threw away any chance of having a good season by dealing away Tyson Chandler for next to nothing not do the right thing and finish with the worst record?

Their worries were confirmed last month when the lowered lottery odds ended up pushing them from the second spot in the draft to fourth, and seemingly out of the competition for the draft’s two biggest prizes—big men Karl-Anthony Towns of Kentucky and Jahlil Okafor of Duke.

For the record, it’s a toss-up over who the better prospect is. Towns can score from the post as well as defend, while Okafor has a much bigger presence in the lane but is not the shot-blocker Towns is.

But unless Knicks President Phil Jackson is planning to mortgage the future in attempt to move into the top two picks, New York won’t have the option of choosing either of them at No. 4.

Let’s look back five years, as it normally takes that long to see which players pan out.

In 2010, the Washington Wizards took John Wall first overall and he’s turned out to be a very good player. But if the draft were re-done today, Sacramento’s DeMarcus Cousins—who was taken fifth—would probably be the first choice.

In 2008, Derrick Rose and Michael Beasley went 1-2 to Chicago and Miami, but Kevin Love (picked fourth), Russell Westbrook (fifth), and DeAndre Jordan (second round, 35th overall) have each turned out to be better players.

The Injured Joel Embiid: The Next Greg Oden or Nerlens Noel?

The 2007 NBA Draft featured the infamous Greg Oden/Kevin Durant debate that was quickly answered when a rash of injuries derailed Oden’s career. While the former MVP Durant is the best from this class, Marc Gasol (taken 48th overall) and Joakim Noah (ninth) have been very good centers.

In 2006, the draft was a weak one with second overall selection LaMarcus Aldridge being the best of the bunch. However, Paul Milsap (47th overall), Kyle Lowry (24th), Rajon Rondo (21st), and Rudy Gay (eighth) have all turned out to be good players.

So for five drafts between 2006 and 2010, the best player was available at the fourth pick three times.