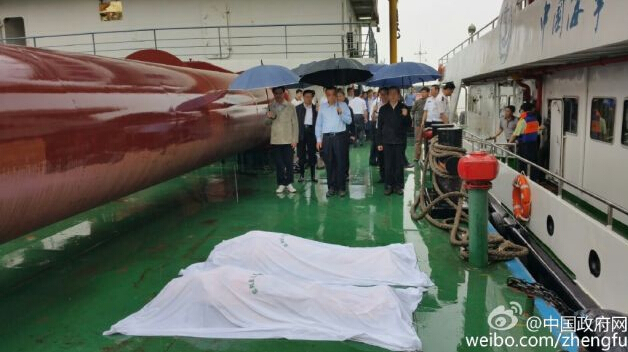 A June 3, 2015 screenshot from the website of China’s State Council shows Chinese Premier and other government workers mourning the victims of the Eastern Star cruise ship that sank in the Yangtze River. (Screenshot/Epoch Times)
China

Why Did the Chinese Regime Censor Its Own Premier?

When the sinking of the Eastern Star cruise ship in the waters of the Yangtze river in central China’s Hubei Province caused the deaths of over 400 people, Premier Li Keqiang headed to the site of the disaster, where photos of him holding an umbrella and mourning the deceased victims were taken.

The photos, released by China’s State Council on June 3, were quickly retracted by the Communist Party’s propaganda agency, which sent a nationwide notice to all state-run media ordering that the photos not be published in newspapers on June 4th.

According to the online edition of Hong Kong’s Oriental Daily, the censorship is intended to avoid any reminder of the Tiananmen massacre in 1989, in which hundreds or thousands of unarmed protesters were killed by People’s Liberation Army forces.

Twenty-six years later, Tiananmen and June 4th, the date of the massacre, are still among the most politically sensitive terms in the eyes of Chinese regime censors.

Reporting on the Eastern Star tragedy was also quickly curtailed. On June 2, foreign media, including BBC and China Digital Times, were informed of an order from the Party’s propaganda arm prohibiting the dispatching of any more journalists to the disaster scene.