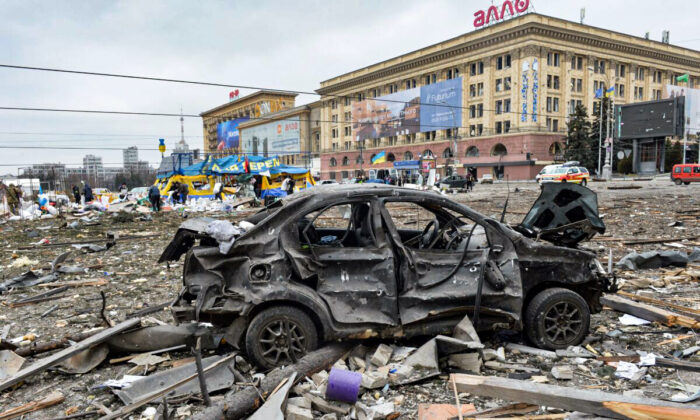 The square outside the damaged local city hall of Kharkiv on March 1, 2022. (Sergey Bobok/AFP via Getty Images)
Viewpoints

Why Did Putin Invade Ukraine Now?

It’s all over the airwaves. Something happened to the normally predictable President Vladimir Putin.

For once, the talking heads are all talking in unison: “He’s gone crazy.”

How else to explain the Ukrainian invasion?

It must have been COVID. He’s isolated himself. Look how absurdly far he sits from other people. (The same could be said of guests on the Gutfeld Show, but never mind.)

Even our former secretary of state and current director of the Hoover Institution Condoleezza Rice is chiming in. It’s not the Putin she knew. Something has gone wrong with the man.

Despite your estimable Russian language skills, despite your even more impressive ability to play duets with Yo-Yo Ma, and perhaps from the best of intentions—we would all wish it were otherwise—you forgot, or possibly chose to ignore, exactly with whom you were negotiating on multiple occasions over many years.

Putin was an officer of the ruthless Russian intelligence agency, the KGB, for 18 years. Ergo he was trained to lie efficiently.

Five of those years he spent in Dresden, East Germany, home of the even more ruthless Stasi intelligence agency, famed for creating a situation where roughly half the population of the country was spying on the other half.

Much of Putin’s KGB life is—not surprisingly—murky, but it ended in 1991 just as the Soviet Union was breaking up and he moved into politics.

Since then, Putin has told us many times that he regards that break-up as history’s greatest tragedy. Why should we disbelieve him, even though, on occasion, he has disabused communism?

Putin has become in essence a czarist—or, more exactly, a czar himself—via a brutal Russian spying tradition that began with the czar’s Okhrana, ironically formed to combat left-wing revolutionaries, that morphed under the Soviets into the Cheka, then the NKVD, then the KGB and now, under oligarchic capitalism, the FSB.

Although ideologies differed, techniques were much the same. The joke used to go: “Lubyanka [KGB headquarters] is the tallest building in Moscow. You can see Siberia from the basement.”

That’s the world from which Putin emerged.

From the beginning, he has never wavered in his views. But why now has he suddenly acted on them?

That’s not difficult to answer. Putin is a crafty man who was biding his time until the propitious moment to begin his reconstitution of the Soviet Union, meaning really, to him, the Russian empire.

As former President Donald Trump mentioned with his customary frankness during his CPAC speech: “The problem is not that Putin is smart. Of course, he’s smart. The real problem is that our leaders are dumb.”

So what was the propitious moment?

It came on both sides of the Atlantic. Theodore Dalrymple explains the European side well on these digital pages when he cites the moment the mega-environmental gestalt of teenager Greta Thunberg and her clones took over that continent’s worldview.

That meant a wishful belief in the efficacy of alternative energy with the real-life result being an over-reliance on Russian oil to save themselves from freezing to death in winter.

Something similar was helped along on this side of the Atlantic by President Joe Biden’s almost instant rollback of Trump’s energy independence, cheered on by his party’s left-wing, and the jejune woke claque.

The two sides reinforced each other in their unspeakable irresponsibility, weakness, and apparent self-sabotage.

Putin, and, of course, Xi Jinping, could not have asked for more.

For Putin, that meant his time had come to move on Ukraine—a prize he had wanted for years and that many regarded as part of Russia anyway.

He probably didn’t expect as much resistance as he is getting from the Ukrainian people, but, brave as they are, that is not likely to matter in the end. At least that is the view so far.

Calling Putin crazy is the kind of self-serving cop-out that led to the mess, or should I say cataclysm, in the first place.