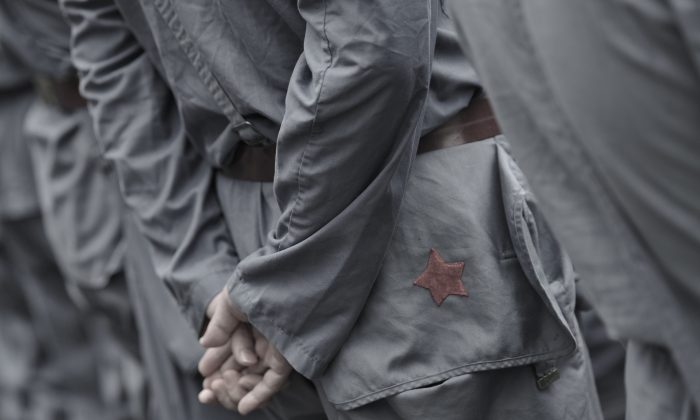 For a political organization founded to perpetuate revolution, the Chinese Communist Party ironically fears it. But revolution is already underway in China, and the other shoe is about to drop.

One of the central contradictions of the regime today is its relationship between its founding ideology and the facts on the ground. Chinese school children must sit through political lessons on Marxism (or at least the Party’s version of it), Mao Zedong Thought, Deng Xiaoping Theory, and other Party leaders.

For a political organization founded to perpetuate revolution, the Chinese Communist Party ironically fears it.

Indeed, the rich and powerful in China have a vested interest in upholding the banner of Marx and Mao—it is a form of political insurance with the Party, and buttresses the legality of the regime.

But for the poor—an estimated 60 percent of China’s 1.4 billion population—the Party’s theoretical teachings offer scant relief. And the gap between the rich and poor will only grow as billionaires continue their unbridled plundering of public and civic wealth, while the penniless are blocked from scaling the social ladder—a structure that has not changed for nearly 20 years.

According to orthodox Marxist theory, the Chinese Communist Party has long degenerated into a predatory elite bourgeoisie, the very object of the communist revolution. The people at the bottom of the society now have the political legitimacy to dispose of the Party, which has become the worst tyranny in history.

While the Chinese regime’s ideological doctrine serves as a double-edged sword today, Party central will never abandon it. Former paramount leader Deng Xiaoping was open to economic and other reforms in his day, but never rejected Marxism and Mao Zedong Thought.

The Chinese people want a revolution—but not the Marxist kind. They’ve given up the theoretical weapon of Marx, embracing universal democratic values instead.

Some seek a full democratic revolution; freedom of speech, freedom of association and assembly must be immediately institutionalized. Others hope to overthrow the Communist Party, allow equal access to wealth, and want to keep the Party’s constitution in the name of maintaining “social stability.” Those of the latter group may make their demands under the banner of “democratic revolution,” but they are most likely connected with the regime.

The Chinese people want a revolution—but not the Marxist kind. They’ve given up the theoretical weapon of Marx, embracing universal democratic values instead.

Despite the proliferation of theories and potential revolutionary masses—just check Twitter and Weibo for expressions of revolutionary sentiment—there still isn’t an organization or leader to guide the revolution. That’s because the Party, in consulting its own founding history, is almost pathologically sensitive to organizations.

“Spy, shut down, arrest”—that’s the Party’s strategy to contain any organization in China. To this end, informants can be found in book clubs, nonprofits, and colleges; civil organizations and foreign-aided non-governmental organizations such as Open Constitution Initiative and China Rural Library have been closed; and activists that are even slightly popular—Xu Zhiyong, Wu Gan, and others—have been detained, and are granted very limited freedom upon their release.

Genie Out of the Bottle

But for all its strict censorship, the Party failed to prevent one political leader from starting to harness China’s revolutionary masses.

Former Party official Bo Xilai was a popular figure across the social spectrum when he ran Chongqing from 2007 to 2012. Bo promulgated Mao-inspired leftist ideas and ran a Cultural Revolution-style “sing red songs and smash black gangs” campaign, temporarily reviving a communist spiritual backwardness among the residents of Chongqing. Many Party members and common people bought into Bo’s rhetoric and believed that he would be a leader that would guard their interests.

Because the Communist Party can’t stand competition, Chinese leader Xi Jinping purged Bo for “unorganized behavior” and corruption when his popularity was still in an embryonic state.

But Xi has only temporarily closed the lid on the genie’s bottle. The revolutionary masses have already had a taste of following a charismatic, popular leader, and that undercurrent is ready to surface again at any time.

Since the Nobel Peace prize was awarded to Chinese dissident Liu Xiaobo in 2010, the Party completely shut the door on reform, and Beijing has been especially sensitive to any hint of brewing “revolution.”

This year’s June 14 edition of The People’s Daily featured five articles stressing the deep harm caused by “color revolutions”—protests that result in the overthrow of oppressive governments—and that the democratic system cannot be forcibly grafted onto China. The articles say China must be alert to the infiltration and spread of “color revolution”; “hostile” Western forces have never given up on undermining and ousting the Chinese Communist Party; and China must eradicate its “superstitious” faith in Western institutions and Westernization.

Chinese authorities are maintaining the strategy of spending money to buy and promote “social stability,” but it won’t work with China’s economy slowing down and unemployment starting to becoming a severe social issue. Indeed, the word “revolution” is starting to surface on the Chinese Internet with increased frequency.

One shoe of revolution has fallen. The other shoe hasn’t yet dropped—only delayed by the Party’s vigilance in intensely monitoring and suppressing dissent.

The Chinese Communist Party should step down to preserve its own safety and if it has a thought for the nation’s future interests. Otherwise, it will face two potential revolutions: A color revolution led by the middle classes and the intellectuals, or a violent, proletarian upheaval by the lower classes.

Does China still have the opportunity to improve? Probably not. The present situation could evolve rapidly and play out similarly to the final years of the Qing Dynasty when revolution deposed imperial rule.

Before the Other Shoe Drops

Regimes collapse when there’s a coup, a financial crisis, a severe dispute between officials and the people, frequent violent, lethal resistance, or foreign invasion. Sometimes, these factors happen all at the same time.

The most likely revolutionary factor facing China today is a financial crisis. The Chinese regime has introduced several financial policies to lift the stock market, but whether they will work remains to be seen. The state of the international economy is extremely difficult to predict, and could yet exert a major influence on China.

Meanwhile, the other shoe is falling—slowly, but surely. Chinese society is constantly deteriorating as the state misspends social resources, brews social hatred, and degrades social morals. Over time, the revolutionary masses grow in number, awaiting the opportune moment to emerge.

Who should be held responsible for this situation? The Chinese Communist Party, of course. Normal human social order was overturned when the Party first eliminated the propertied class, and turned private ownership into public ownership. Using national resources to promote public ownership, “red” families and officials soon became millionaires and billionaires, while China grew the world’s largest class living in and on the cusp of poverty.