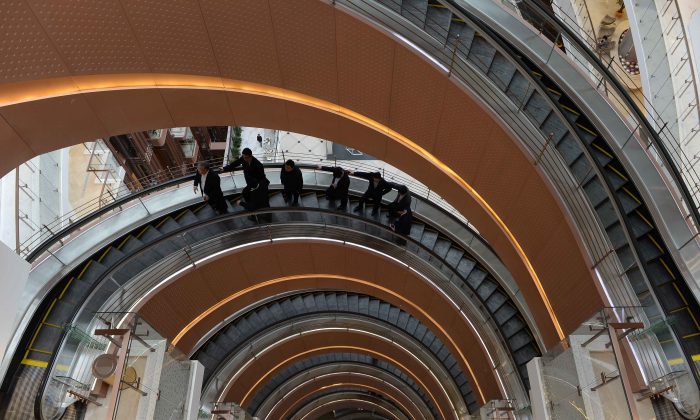 Customers ride a spiral elevator in a newly-opened shopping mall in Shanghai on March 17, 2015. China's overseas investment appears to be slowing down with the broader economy. (STR/AFP/Getty Images)
China

China’s ambitious overseas capital investment projects, which exceeded US$1.13 trillion at the end of September, are experiencing serious setbacks.

According to a recent report, China Development Bank (CDB) and the Export-Import Bank of China, the top two banks in terms of international development financing, are facing severe political, social, and environmental risks.

The report, co-authored by members of the Global Economic Governance Initiative (GEGI) and the Chinese Academy of Social Sciences is titled Fueling Growth and Financing Risk: The benefits and risks of China’s development finance in the global energy sector. It states that between 2007 and 2014, the two Chinese policy banks loaned $118 billion to overseas energy projects, while the World Bank, Asian Development Bank, the Inter-American Development Bank, and the African Development Bank combined issued about the same amount in energy loans.

It also cites a country risk rating document by the Organization for Economic Cooperation and Development (OECD). The average score for the top 20 countries financed by the World Bank’s energy projects is 5.25 (1 stands for low risk, 10 for high risk), much lower than the 6.4 average of the 13 countries financed by China.

According to OECD standards, six of the top 10 countries that received Chinese financing between 2013 and 2015 were considered “most risky.” By contrast, only two of the World Bank’s top 10 recipients of development loans between 2011 and 2015 were in the same risk category.

The report concludes that the surge in lending abroad has put China’s policy banks at risk of having to face loan defaults in many countries.

Chinese media also reported on the failure rate of overseas Chinese enterprises, particularly in the mining industry, where it may be more than 95 percent. With declining international economic conditions and investment environments, China may have to end its “Big Spender” approach of mixing loans and investments.

According to an analysis by Oxford Economics, Venezuela, Iraq, Mongolia, Angola, Zambia, Nigeria, Gabon, Algeria and Azerbaijan need to completely reform their fiscal outlawys to reduce reliance on big commodities and bring their public finances back into balance.

Energy and minerals make up around three-fourths of exports in these countries. China has investment relationships and provided loan assistance to all of them. Take oil for example. With the current oil price at about $50 a barrel, it weakens the ability of borrowers to repay their loans with oil as collateral. Some loans with oil as collateral have been converted into non-performing loans. China has renegotiated debt terms with Chad, Ghana, Angola and other countries.

Meanwhile, Venezuela’s economy, where crude oil exports account for 96 percent of export earnings, has collapsed. An oil price decline of $1 per barrel reduces the national income by $700 million. Since 2007, Venezuela received $65 billion in loans from China for development of refineries, gold mines and railways. In May 2016, Venezuela delayed payment of the principal of about $20 billion to $24 billion of outstanding debt and only paid interest. China began to question the CDB’s overseas lending and its risk assessment and why it did not consider the credit history when lending to Venezuela.

Some commentators have pointed out that when Chinese leaders developed close diplomatic relations with Hugo Chavez 10 years ago, Venezuela had already defaulted on foreign creditors and gone through four debt restructurings. At present, Venezuela’s inflation rate is as high as 800 percent. Some projects that rely on Chinese capital have been damaged or abandoned, including a half completed high-speed rail. Long-term dollar shortages prevented Caracas from paying its contractors who could keep oil supplies flowing. Beijing is deeply troubled as loans from China are backed by this declining oil production.

China has the largest foreign exchange reserves in the world, although they have declined from their peak of $3.99 trillion in June 2014 to 3.17 trillion in September 2016. But this massive reserve has been rapidly diminishing. With an unstable domestic political and economic environment at home, huge capital outflows have become the norm for China. In spite of strict controls, the government is unable to curb the accelerated outflow of Chinese capital. Over the past year, China’s foreign exchange reserves sharply declined due to capital outflows, overseas investments, and a stabilizing exchange rate. Of the remaining $3 trillion reserves, about $1 trillion is U.S. debt. The remainder also has specific ties and functions; it is not money sitting in a bank vault, as imagined by some.

To maintain this $3 trillion foreign exchange reserve, the Chinese government has expended a lot of effort. According to Japan’s Nihon Keizai Shimbun, the procedures for Japanese enterprises to withdraw from China are very complex as a result of China’s strengthening foreign exchange controls. When the Japan Business Federation led Japanese businesses on a visit to China this September, it requested a special reception window to handle procedures for foreign enterprises wanting to withdraw from the Chinese market. When Deutsche Bank sold $3.9 billion shares of Huaxia Bank, Chinese authorities asked that the money transfer be done in batches, rather than a one-time transfer.