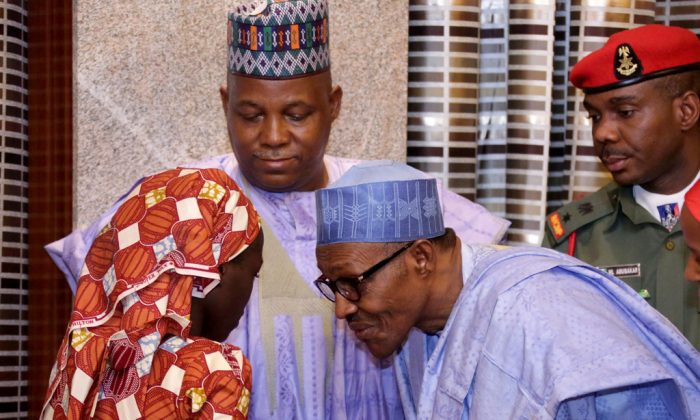 Nigerian President Mohammadu Buhari meets with a woman rescued from Boko Haram, in Abuja, on May 19, 2016. (Stringer/AFP/Getty Images)
Opinion

Muhammadu Buhari, a disciplinarian former military leader, came to power in Nigeria with a specific mandate to improve on his inept predecessor’s inability to confront the Islamist terror group Boko Haram, which has torn a terrifying path across the country. Even after the world rallied to help Nigeria rescue the 276 schoolgirls the group kidnapped in 2014, little if any headway was made, and Goodluck Jonathan, then the president, was duly turfed out of office in a reassuringly orderly election.

Buhari’s victory was a chance to turn the tide. But 15 months after he took the helm, Boko Haram has not been defeated—and the huge majority of the 276 kidnapped schoolgirls remain unrescued.

There are three main reasons for this, each of which speaks to Nigeria’s general position of decline and incapacity, of corruption and squandering. Buhari has made no real progress with society at large and scant progress with his military.

Goodluck Jonathan did provide large sums of money to re-equip his floundering soldiers on the frontline with Boko Haram. They had been outgunned and out-maneuvered by an enemy with faster vehicles and greater firepower. But of the funds earmarked for the fight, plenty never reached the soldiers at the front; large sums were apparently stolen by corrupt generals who were willing to let their men die.

Nigeria Facing ‘a Famine Unlike Any We Have Ever Seen’

Still, even if the funds had reached the front, they wouldn’t necessarily have been used to buy the right equipment. The Nigerian army’s performance in West African multilateral missions has earned it a reputation for being rough and indiscriminate—its strategies relying principally on heavy bombardment. In the thick forests where Boko Haram has some of its strongholds this makes little sense—especially given the army has little to no precise intelligence on where its enemy is.

Reconnaissance equipment and aerial heat-seeking capacity would depend on helicopters, drones, and aircraft, and the military is not well supplied with those. Buying armored cars is of no use so long as Boko Haram has lighter, faster vehicles.

Even with the right equipment, military strategy is critical—but there’s no evidence that Buhari’s generals are adequately schooled in modern counterinsurgency tactics. And even where there is some genuine leadership, discipline among the frontline troops can be appalling. Wiping out the villages they are sent to protect doesn’t exactly win hearts and minds.

Soldiers from other national armies are fighting Boko Haram along their borders with Nigeria. But their countries are generally not in meltdown and Boko Haram does not control vast swaths of their territories—nor do their local political figures need to invoke the threat of Boko Haram to leverage their positions.

This fits into a more general malaise that is eating away at Nigerian society, and which Buhari seems equally unable to address.

Something is rotten in Nigeria—and something peculiarly Nigerian at that. Violence has ticked up again in the Niger Delta, the Christian-Islamic divide is as great as it was when Buhari took office, and his painstakingly chosen cabinet has no great accomplishments to its name.

Everyone who seeks power still seems to be serving vested interests or pursuing personal gain. There is, in many respects, no longer a Nigeria. The name describes little more than a nation-sized slush fund.

All the while, the catastrophic insurrection in the north goes on. The army periodically claims Boko Haram is defeated or on the verge of defeat—and Boko Haram then proves it isn’t. In many ways, it seems better organized and more resilient than the army or the government itself.

On all current indications, Buhari’s return to power is a sad disappointment, and those who want to give him more time find it hard to argue their case. The anguished parents of missing schoolgirls, those who’ve fled shattered villages, and those maimed in suicide bomb attacks are all still wondering why he’s taking so very long even to get started.