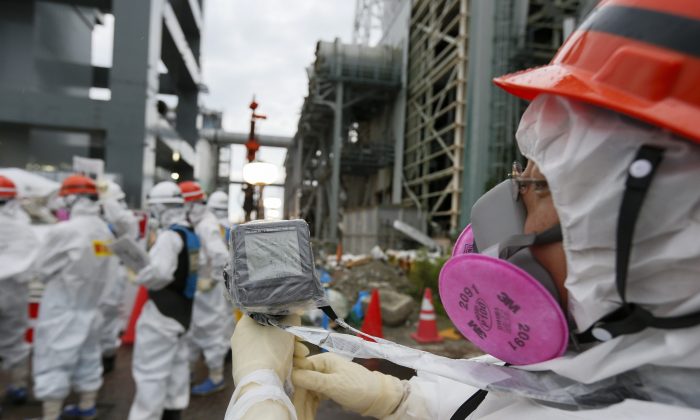 A Tokyo Electric Power Co.'s staff measures the radiation level as workers work on the construction of an ice wall at the tsunami-crippled Tokyo Electric Power Co.'s Fukushima Daiichi Nuclear Power Plant in Okuma, Fukushima Prefecture, northeast of Tokyo on July 9, 2014. Tokyo Electric Power Co. (TEPCO) will build a frozen ice wall around the buildings of Units 1 to 4 at the tsunami-devastated nuclear power plant to stop radiation-contaminated water from flowing to the sea. TEPCO has been struggling with massive amounts of toxic water as the operator continues to pump water into three reactors to keep them cool. The plant suffered meltdowns at three of its six reactors after a tsunami swept through the facilities in March 2011. (Kimimasa Mayama/AFP/Getty Images)
Asia & Pacific

Why Are Fukushima Engineers Creating a $317M Ice Wall Under a Contaminated Nuclear Plant?

Engineers at Fukushima nuclear power plant have been trying to create a $317M (£185M) ice wall to isolate contaminated water from mixing with groundwater. However, there has been a steady stream of news articles reporting on problems associated with the work so far. They are simply adding to the sense of despair and distrust that has hung over the clean-up operation since the disaster occurred at the site more than three years ago. However, a closer look at the technology inspires hope.

Artificial ground freezing (AGF) is not as crazy as it might sound. It is a technique that has been used in civil engineering for more than a century. Invented by German engineer FH Poetsch in the 1880s for use in the mining industry, the principle of the process has not changed since then.

The idea is to pipe brine solution (extremely salty water) at –30°C to extract heat from the under the surface, and to cause the water in cracks and pores to freeze. The ice binds the rock and soil grains together in a sheet up to several metres thick, while also preventing the movement of unfrozen water through the ground.

At Fukushima, they will insert 1,550 pipes that go 33 metres deep. In the last month 100 pipes have been put in place, and testing has begun.

The freezing of the ground has two effects – improved strength and reduced permeability – which make AGF a useful solution to a range of civil engineering problems. As well as stabilising shafts and preventing water from entering working areas in mines, AGF is widely used in construction of dams and tunnels, where water can make the excavation impossible.

Two of the largest, most complex infrastructure projects in the US in recent years – the “Big Dig“, tunnelling an interstate beneath downtown Boston, and the New York East Side Access project which involves boring a new rail tunnel beneath already-buried road and rail networks – have used AGF extensively. It has also been one of the standard options on the table for engineers on London’s £15 billion Crossrail project.

In all these cases, ice-wall technology holds advantages over other methods. It is completely reversible with minimal environmental footprint. It can accommodate a wide range of soil formations and structures, critically giving it the ability to operate in sites which already harbour buried structures and services, such as at Fukushima.

Complex, but Not Sci-Fi

Despite the long history of ice-wall technology in civil engineering, every project is different and subsurface environments are notoriously complex. Things can, and do, go wrong. Nevertheless, the key risk factors are well known. Poor design and maintenance of the refrigeration system is a predictable hazard, manageable through strong project leadership and use of well-informed AGF specialists in both the specification and implementation phases.

Less predictable is the effect of groundwater flow, which is a critical factor at Fukushima since groundwater management is the primary objective of building an ice wall there. Moving water freezes less easily than stationary water, and when it does it is not easy to predict how it would do so. Improvements in computer simulation of freezing behaviour in porous media and in modelling the complexity of subsurface environments are key.

So the scale of the challenges faced by the ice-wall engineers at Fukushima are huge. But they are not unprecedented. Ground freezing has even been used for radiation mitigation before, for example at mining operations in Canada and Australia where radioactive radon gas is a threat to the health and safety of mineworkers. The idea of using ice-wall technology to isolate and treat a volume of contaminated groundwater – exactly the objective at Fukushima – is based on patents outlining the concept of an underground ice-walled storage volume dating back to the 1960s.

None of this diminishes the magnitude of the problems facing engineers and managers at the world’s highest-profile contaminated site. But the ice-wall technology itself is not the bizarre stunt that has sometimes been portrayed. It might even work.

Jonathan Bridge receives funding from the Natural Environmental Research Council and the Technology Strategy Board. He consults to the UK National Nuclear Laboratory. This article was originally published on The Conversation. Read the original article.