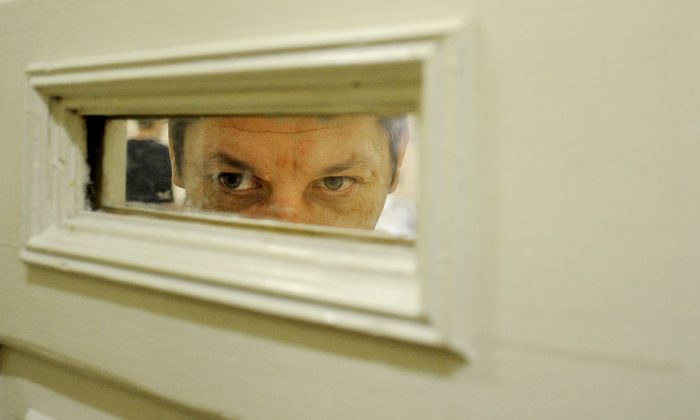 A patient looks through a window of the door in the Serbsky State Scientific Center for Social and Forensic Psychiatry, which has called for mandatory treatment of alcoholism and drug abuse. Moscow, Oct. 10, 2011. (Natalia Kolesnikova/AFP/Getty Images)
Opinion

Why Alcohol Can Doom Putin’s Dreams

Russians’ love for vodka has a long history. Legend holds that vodka arrived in Moscow in the 14th century, brought by Genovese merchants to Prince Dmitry Ivanovich. Legend also says that monk Isidore, who lived in the Chudov Monastery, inside the Kremlin, made a recipe for Russian vodka around 1430. He probably didn’t anticipate the devastating effect that alcohol addiction, mainly to vodka, would have on Russians’ health and quality of life and on the country’s economy and social fabric.

What explains Russians addiction to alcohol, particularly vodka? One reason is that excessive drinking has been promoted by the government at various times to increase revenues from taxes on alcohol. Marxist historians, however, contend that heavy alcohol consumption was promoted as a way to eliminate dissent, while other observers claim that alcohol is, for many, the only escape from the drabness of everyday life.

When the Bolshevik Party came to power its leaders tried—without much success—to reduce alcohol consumption in the Soviet Union. Joseph Stalin, however, reestablished state monopoly to generate revenue. Mikhail Gorbachev, in 1985, increased controls on alcohol consumption and imposed a partial prohibition through a massive anti-alcohol campaign.

That campaign, which included severe penalties against public drunkenness and alcohol consumption, as well as restrictions on liquor sales, was temporarily successful. It reduced per capita consumption and improved quality of life measures such as life expectancy and reduced hospital admissions. However, the population disliked this policy and it ultimately had to be abandoned. The consequences of the abandonment were felt again soon afterwards.

Periodically, reports surface on the great number of people who die as a result of consuming fake vodka and other alcohol substitutes. It is estimated that more than 40,000 Russians die every year after drinking such toxic liquids, which include medical disinfectants, after-shave lotions, and other dangerous substances.

Today, the average Russian drinks 4.75 gal. (18 liters) of pure alcohol a year, mostly as vodka and other black market moonshine called samogon. According to the World Health Organization (WHO), this consumption is far above what is considered safe to drink, and also higher than in any other nation in the world.

Russia now has one of the highest rates of alcohol-related illness, the long-term types of which include neurological, cardiovascular, psychiatric, and liver problems, among many others. In the short term, however, and generally as a result of binge drinking, it provokes several kinds of injuries: violence, risky sexual behavior (including unprotected sex), alcohol poisoning, and miscarriage and stillbirth in pregnant women.

The strong connection between excessive drinking and interpersonal violence cannot be overstated. However, due to social tolerance of violent behavior and incomplete or inaccurate information, official statistics only record a small percentage of violence. Some, however, are worrying. Among male perpetrators of spousal homicide, 60-75% of offenders had been drinking heavily prior to the incident.

Among young men, the risk of suicide is five times higher for heavy drinkers and nine times higher for alcoholics. Although men drink more than women, excessive alcohol consumption during pregnancy can result in the child developing fetal alcohol syndrome or show fetal alcohol effects, which are associated with delinquent and violent behavior later in life.

Russians’ poor health status has translated into a short life expectancy. According to United Nations Department of Economic and Social Affairs (UN DESA) Population Division statistics, life expectancy for males in Russia is 61.56 and for females it is 74.03. These figures are 17 years lower than those for the Western European population. By contrast, these figures in Japan are 79.29 and 86.96 respectively.

In June 2009, the Public Chamber of Russia estimated there were 500,000 alcohol-related deaths annually in the country. This figure highlights a very serious situation, particularly taking into consideration that the country is going through a severe demographic crisis—it is estimated that its population will drop by 20 percent by 2050.

Although no precise figures are available, the direct and indirect costs of alcohol abuse in Russia can be considerable. Unless stronger measures are taken soon, Vladimir Putin’s dreams of a greater Russia will not be realized. The situation was aptly described by Oliver Bullough in his book The Last Man in Russia, “One man’s alcoholism is his own tragedy. A whole nation’s alcoholism is a tragedy too, but also a symptom of something far larger, of a collective breakdown.”