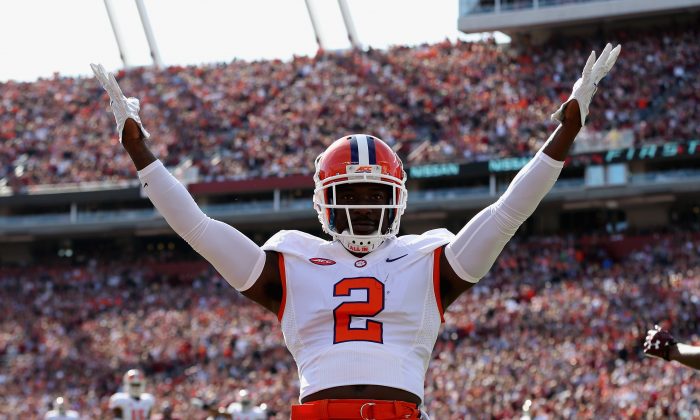 Mackensie Alexander and the Clemson Tigers simply need to beat North Carolina and they're a lock to make the playoffs. (Streeter Lecka/Getty Images)
College Sports

The four-team College Football Playoffs will officially be announced on Dec. 6, and though on the surface it looks like the Pac-12—with no unbeaten or one-loss teams left—will be the one major conference left without a chair when the music stops, anything can happen between now and then.

The SEC, Big Ten, ACC, and Pac-12 are all having their conference title games this weekend—with plenty of playoff implications involved—and though the committee has been known to flip-flop teams in the past, realistically only 9 of the top 20 teams ranked by it have a fighting chance.

1. Clemson (12–0): Win and they’re in. An easy one. The committee obviously loves the Tigers, having voted them No. 1 every week. A victory over North Carolina in the ACC title match would give them their third big win of the season—following triumphs over Notre Dame and Florida State—and a likely top seed in the CFP.

2. Alabama (11–1): Win and they’re in as well. The Tide won the SEC West—which is right up there with the Big Ten East as the two toughest divisions in college football—and they did it with relative ease. Although the early home loss to Ole Miss was a bit of a surprise, they rebounded with resounding wins over Georgia, Texas A&M, LSU, and Mississippi State—four teams with at least eight wins—by double digits. A win over Florida only cements their case.

3. Oklahoma (11–1): Idle this weekend—as sole champs of the Big 12, they’re a lock to get in. Any losses for Alabama and Clemson will only strengthen the case for Bob Stoops’s team. The Sooners beat powerhouses Baylor, TCU, and Oklahoma State in successive weeks to end the season with a bang, and unlike last year there will be no co-champs splitting the votes for the lone Power 5 conference without a title game.

4. Iowa (12–0): Win and they’re in. Even though currently Iowa’s biggest win is a victory over Northwestern, a win over the Spartans would solidify their selection. Plus, as the committee showed last year when it suddenly moved an undefeated-but-teetering Florida State team ahead of one-loss TCU in the final rankings, an unbeaten team from a Power 5 conference trumps all.

5. Michigan State (11–1): Win and they’re in—moving ahead of Iowa. The Spartans have beaten the likes of Ohio State, Michigan, and Oregon with only a last-second loss to Nebraska as the lone blemish on their résumé. A victory over the Hawkeyes would mark their fourth over a team currently ranked in the CFP’s top 25.

6. Ohio State (11–1): Idle this weekend. This is where it could get interesting. What if ‘Bama loses the SEC title game to a two-loss Florida team and Michigan State beats Iowa? Suddenly Ohio State’s lone loss (17–14 to the Spartans) looks even better, and the committee members would have to choose between a two-loss ‘Bama team, a two-loss SEC-Champion Florida team, or the one-loss defending national champions. Would they dare give the Big Ten two spots and stiff two of the Power 5 conferences?

7. Stanford (10–2): Beat 8–4 USC for the Pac-12 Championship and hope for some upsets. An Iowa win would actually help them in terms of strength of schedule—but only slightly. The Cardinal lost to Northwestern—which currently represents Iowa’s biggest win—in their season opener. Stanford’s win over Notre Dame last weekend was a nice résumé builder, and if they have Pac-12 Champion written next to them it could only help their case.

Should Clemson and Alabama lose, the committee would have to choose between the two-loss Pac-12 Champion Cardinal, a two-loss SEC-Champion Florida team, a two-loss Alabama squad, a one-loss Clemson team, a one-loss ACC Champion Tar Heel squad, and a one-loss Ohio State team that didn’t make their conference championship game. Good luck to the committee in that case.

8. Notre Dame (10–2): Idle this weekend. Here’s where the luck of the Irish runs out and the rankings become fickle. Even though they’re ranked two spots ahead of North Carolina, Notre Dame, which is coming off a loss, is not going to move into the top four under any circumstances. They already have two losses, they won’t be a conference champion (because they’ve their independent TV deal with NBC over conference affiliation), and they can’t use a conference title game to boost their résumé. They’re out.

9. Florida State (10–2): Idle this weekend as well. The Seminoles, like the Irish above them, have no chance at moving into the top four despite an impressive win over Florida to end the season. They already have two losses and lost the ACC Atlantic to Clemson. The only other ACC team that has a shot is the Tar Heels.

10. North Carolina (11–1): Win and they could possibly be in. Possibly. This would really test the playoff committee. The Tar Heels won’t be favored against Clemson, but if they beat the Tigers, suddenly the committee is choosing between a pair of one-loss ACC teams, Ohio State, the loser of Iowa/Michigan State, and a victorious Stanford. Although it seems crazy that the committee would possibly vault North Carolina six spots into the No. 4 spot with a win, these pre-final rankings mean nothing—as we learned last year. North Carolina has the third-longest winning streak in the country at 11 games (they lost to South Carolina 17–13 in their opener), and if they have “ACC Champions” written next to them, it would set them apart from Clemson and Ohio State.

12. Baylor (9–2): Even if they beat Texas by 100 points on Saturday, Oklahoma has already won the Big 12 and with a pair of November losses to TCU and Oklahoma State, the Bears have no shot at getting into the top four.

18. Florida (10–2): Beat Alabama for the SEC title and they would throw this whole system into chaos. Think about it. If they beat ‘Bama (decisively, like Ohio State did to Wisconsin last year for the Big Ten title), the Gators would have 11 wins and the title of champions of what has long been regarded as the toughest conference in the land. In that case, would the committee really take a two-loss Crimson Tide team over a two-loss Gator team if Florida won the head-to-head matchup?

The other option would be to move Ohio State into the top four as the second Big Ten team and leave the SEC completely out of the playoffs—at which point the committee would lose all credibility in the South, anarchy would reign, and we’d have to completely overhaul the playoffs after just two years because the committee members would fear for their own personal safety. Plus you’d have outrage over a team that didn’t even make it to their own conference title game getting a national championship shot similar to Nebraska in 2001.

Of course, if they did jump the currently 18th-ranked Gators all the way into the final four, then they would prove again just how meaningless their pre-final rankings really are. But the Gators have to win—by a good margin—first.

19. Houston (11–1): Even if they beat 10–2 Temple for the AAC title, they’re not going to be considered for a playoff spot with the crowded spots at the top. Ditto if Temple wins.

20. USC (8–4): If the Trojans win, the committee members will probably breathe a sigh of relief that they don’t need to consider a Pac-12 team because no four-loss team is making it—conference champions or not—and neither is a three-loss Stanford team.