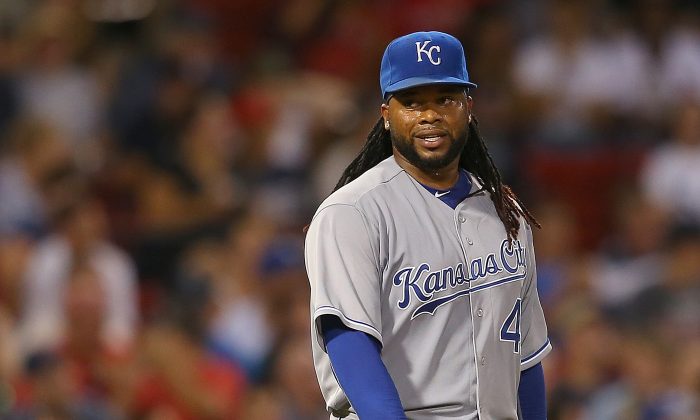 Johnny Cueto struggled after being dealt to Kansas City in the offseason going 4–7 with a 4.76 ERA. (Jim Rogash/Getty Images)
Baseball

There have been a number of big-name signings in baseball’s offseason this winter, yet free-agent starting pitcher Johnny Cueto is still looking for a deal—or at least a better one than the $120 million offer he reportedly turned down from Arizona.

But now that most of the other starters have signed their big deals—and Cueto is still waiting for his—did he make a big mistake?

If he doesn’t get a better offer, then obviously it will be hard to look at it any other way.

The market for nine-figure deals for pitchers appears to have dried up.

Granted, this would be more alarming if it were February and spring training was about to start, instead of it being December during MLB’s winter meetings. But there is plenty of cause for concern that he may be the one left without a chair when the music stops.

Most of the teams with a desire for a top-notch starting pitcher have already got their man—and paid a pretty penny for him.

But who’s going to offer it now, and where’s the righty’s leverage?

The number of interested teams that can even afford that kind of money has dwindled considerably since then. And let’s be honest, Cueto’s audition with Kansas City (4–7, 4.76 ERA) brought down his value somewhat—whether he’s aware of it or not. As did his up-and-down in postseason.

The Diamondbacks quickly moved on from him and signed Greinke, and are probably out of the Cueto bidding. So are a number of other teams like Boston, San Francisco, and Detroit, which can’t afford a second mammoth contract in their rotations.

Meanwhile, the free-spending Dodgers went with a three-year, $45 million deal for starter Hisashi Iwakuma and don’t seem to be looking hard at Cueto. Ditto for Washington, which still has Max Scherzer’s $210 million contract and would like to retain Stephen Strasburg beyond 2017.

What about the two big-market New York teams? The normally high-spending Yankees have been out of much of the upper-tier free-agent bidding this offseason while waiting for some of their own expensive contracts to expire in 2016. Their crosstown rivals, the Mets, likely won’t be bidding on Cueto given that they have tons of starting pitching already.

The Cubs already have two aces and just added free-agent starter John Lackey on a two-year, $32 million contract. Cross them off the list as well.

Small-market contenders like Kansas City, Pittsburgh, Tampa Bay, and Minnesota wouldn’t dream of spending that much money—especially on a free agent who turns 30 next year.

Who does that leave? By my calculations the Cardinals and Angels would seem to be the only teams left that can afford such a deal, though neither is linked to any rumors with the right-hander.

And for good reason.

The Angels have not had success in handing out big free-agent contracts of late. The five-year, $125 million deal they gave to Josh Hamilton three years ago has been nearly a complete wash, as the former MVP was a shell of himself before finally getting released last season. Before that, they spent a truckload ($240 million) to sign three-time MVP Albert Pujols to a 10-year mega-deal. Since signing him four years ago, though, Pujols has yet to match any of the MVP-like seasons he had when he was a nine-time All-Star in St. Louis.

The Cardinals are a better match, but signing big free agents hasn’t been their game plan. Although Cueto probably would be wise to go back to the NL—given how much he struggled in Kansas City last year—St. Louis has yet to be linked to any rumors with him and prefers to build from within their farm system.

What’s left? At best, a mystery team or two leaving almost no leverage for Cueto to get a bidding war going. He may be best off signing a smaller one-year deal with a contender and heading back onto the market a year from now, having put his rollercoaster 2015 season behind him. If he does, hopefully he doesn’t reject the first nine-digit offer he receives.