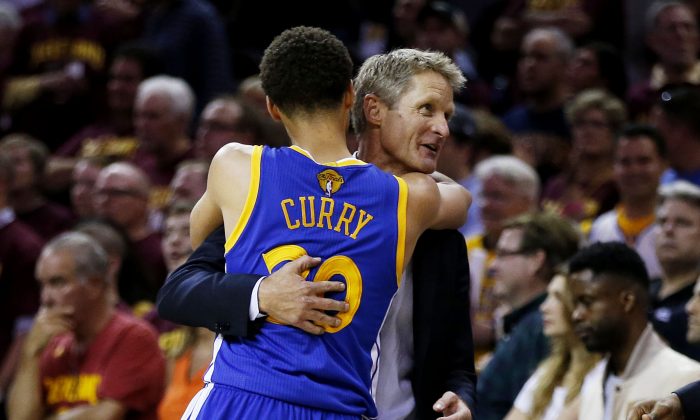 The defending champion Warriors are good.

Off to a record 19–0 start this season—despite head coach Steve Kerr’s injury absence—they are looking to not only repeat as champions but also best Chicago’s record of 72 wins set in the 1995–96 season by a team that went on to win the Finals.

Of course this season is still in its infancy, but the Warriors return every significant contributor from last year’s 67-win squad. How many wins they get this year remains to be seen, but somewhere in the 70s isn’t out of the question.

The hypothetical question is who would win in a series between the current Warriors squad, with reigning MVP Stephen Curry, or that Michael Jordan-led Bulls team of 20 years ago? (hint: not Golden State)

The makeup of these two dominant teams is actually somewhat similar and goes contrary to how most championship teams are built. Neither had a dominant center or effective low-post scorer. Instead they relied on strong perimeter play. Chicago employed a stiff defense, while the Warriors are the toughest to guard around the arc.

The first question for Chicago’s vaunted defense would be who guards Curry, the greatest long-range shooter the NBA has ever seen?

Although Jordan, the former DPOY (Defensive Player of the Year), would salivate at the opportunity to shut down the MVP Curry, most likely Bulls coach Phil Jackson would place Scottie Pippen—who was named to eight All-Defensive first teams in his career—on him, to keep Jordan fresher on offense.

Jordan would still have a tough assignment on Klay Thompson, while Dennis Rodman—who was twice selected as the NBA’s DPOY—would have an epic matchup with Draymond Green in the paint. Both are undersized physical interior players who specialize on defense, although Green is actually one of the better passing big men, while Rodman was the best rebounder of his generation.

On the other side, the Warriors probably wouldn’t want to waste Green defending Rodman—who was never a scorer. They would have plenty of problem matchups of their own, like who guards Jordan—widely regarded as the greatest player ever.

It couldn’t be the undersized Curry so the Warriors would have to either bite the bullet on giving Thompson a shot, bring Andre Iguodala or Shaun Livingston off the bench to try their hand, or switch Green off Rodman and let the versatile big man take his best shot.

Green actually would be the better matchup on Pippen, though—otherwise you take one of your better interior defenders completely out of the paint. Either way, Golden State has some serious matchup problems and we haven’t even figured out who’s matching up with Pippen. Advantage: Chicago.

On his bench, Jackson would have Toni Kukoc—the 6-foot-10 do-everything forward who was the NBA’s sixth man of the year in ’96—at his disposal as well as Steve Kerr (yes, the Warriors head coach) as an adept 3-point shooter.

While Kerr learned a lot from playing under the 11-time NBA champion coach Jackson, it’s hard to say he’s on his level—yet. One title in one year of coaching isn’t a bad start, though, and he had his fingerprints all over the team.

Kerr made the move of the year last year when he convinced the former All-Star Iguodala to unselfishly come off the bench, which set the team’s tone for the entire season. Then Kerr one-upped himself by reinserting Iguodala in the lineup against Cleveland in last summer’s NBA Finals.

Cleveland’s bigger lineup had controlled the series through three games, but when Iguodala came on favor of center Andrew Bogut, it completely changed the complexion of that matchup. The Cavs couldn’t match the Warriors’ small-ball lineup, and Golden State swept the final three games to win the title.

But if they tried that against the Bulls, Chicago could counter by starting Kukoc at center and then both small-ball lineups could switch every defensive matchup on the court. It would be quite the chess match—something Jackson’s very familiar with after coaching against the likes of Pat Riley, Gregg Popovich, and Larry Brown.

In this matchup, Kerr would have a slight advantage in knowing the intricacies of Chicago’s strategies on offense and defense, but he’s still going up against the best coach the game has ever seen in Jackson. Slight Advantage: Chicago.

Both teams are playing with chips on their shoulders. Jordan was hungrier than ever after coming back from his first retirement in the spring of ’95 and seeing his Bulls fall short in the conference semifinals. His first retirement stripped him of a pair of prime years and he was eager to get back to the pinnacle of the NBA.

Although Golden State is coming off a championship, they seem to feel disrespected by the rest of the league. After all, Cleveland was without stars Kevin Love and Kyrie Irving in the Finals. And the Warriors somehow missed out on having to play the Clippers or Spurs, who beat each other up in a grueling first round series. Advantage: Tie.

Overall, as great as the Warriors are, the Bulls of 20 years ago would actually be the best-equipped team in recent memory to handle its perimeter shooting. In other words, the Warriors could have the second-best team of all time this season, but they just don’t match up well against Chicago.

How the Warriors would defend Chicago on the other end raises all kinds of questions, like who could possibly guard Jordan? Bulls in six.