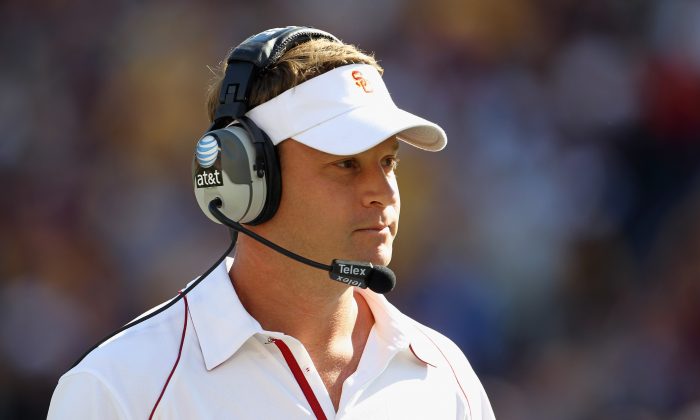 Lane Kiffin went 28-15 at USC before being let go this past weekend. (Photo by Jamie Squire/Getty Images)
College Sports

Who Will Replace Kiffin at USC?

With Lane Kiffin’s recent dismissal at USC, one of the most sought after jobs in college football just opened up. The tradition the Trojans have is right up there with Notre Dame and Michigan among a few, select others. But only Texas can compete with USC as far as money goes in luring a top candidate.

So who will USC ultimately bring in as coach? We’ll break down the top candidates here, starting with the least likely:

Chip Kelly, Philadelphia Eagles head coach—This is certainly an intriguing choice. Yes Kelly just got his current NFL position in the offseason, but the Trojans would bend over backward for him if they knew he had even the slightest interest in jumping ship while in his first year in the pros.

Kelly took a good, not great, Oregon program and immediately turned it into the leader of the Pac-12—previously USC’s status. Though he was Oregon’s coach for just four seasons, the Ducks went to a BCS Bowl every year under his watch, while finishing at the top (or tied) of the conference each time. Not bad credentials.

Would he jump back to college? Probably not, though there is precedent. Nick Saban left the Dolphins in 2006 after just two forgettable seasons, while Bobby Petrino left the Falcons to go to Arkansas after 13 games in 2007.

Steve Sarkisian, Washington Huskies head coach—Sarkisian makes sense in that he was on Pete Carroll’s staff when Carroll had the Trojans rolling for a good decade.

Of course USC is on probation for some violations that were committed under Carroll, so that could be a positive as well as a negative.

Now in his fifth year with the Huskies, Sarkisian is a lukewarm 30–25 overall, though he’s 4–0 in this young season. Keep in mind though that five years is usually a good measuring stick at rebuilding a college program, so USC AD Pat Haden may want to wait this one out to see where he has the Huskies before offering him the reins.

Jeff Fisher, St. Louis Rams head coach—Fisher, a USC alum, was probably a hotter candidate 10 years ago when he had the Titans rolling—though most would consider jumping from the NFL to college a demotion—making a previous move unlikely.

Now at 55 and in his second year in St. Louis he has the 1–3 Rams still in rebuilding mode and one-time hot prospect Sam Bradford has yet to develop. Facing another rebuild with the Rams, Fisher is probably more interested in coming to USC, than vice versa.

Given that he’s an assistant head coach he would probably be the most amenable to leaving his current post.

There are a couple of questions to be answered though: is he holding out for another NFL job? Would he succeed in college with no prior experience?

As long as the Broncos keep winning this season, Del Rio will probably have some NFL head-coaching looks in the offseason. And while it’s never a sure thing to have college success after being in the pros, Pete Carroll did it to the tune of a 97–19 record.

Chris Peterson, Boise State head coach—Everybody wants Peterson. The question has always been what would it take to get him?

Peterson is 87–10 now in his eighth year out in Idaho. Even more impressive is his 2–0 record in BCS Bowl games with his little-known Broncos, while sporting a pair of undefeated seasons in 2005 and 2009.

The obvious lure for athletic directors of big programs is if Peterson can beat the big programs with such small resources out in Boise, imagine what he can do with some real resources?

But why would Peterson leave town at this time?

His teams have missed out on the lucrative BCS Bowls each of the past three seasons despite a ridiculous 35-4 combined record—something which would drive any coach crazy. Maybe the Trojans can capitalize.