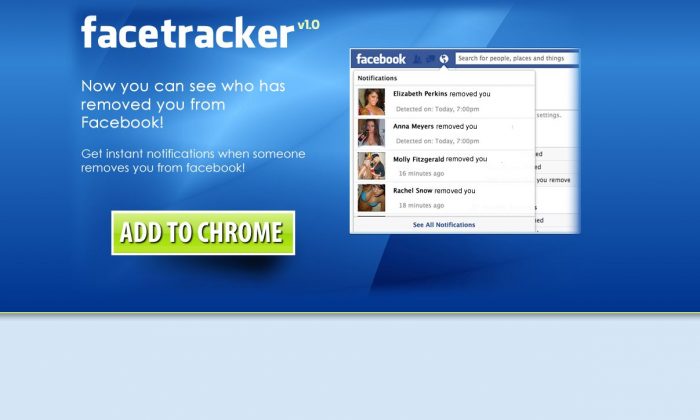 Facetracker and FB-Remove are both scams.
Social Media

An applicaton called “Who Removed Me” from FBRemove.com and has a “Facetracker” logo on the top is a scam. It is recommended not to download the extension on Chrome.

The scam reads: “Now you can see who was removed you from Facebook! Get instant notifications when someone removes you from facebook!”

It’s just a trick to send spam to your Facebook friends by sending fake pictures and redirecting them to survey scamming websites or downloading the Chrome app.

The scam can prompt users to “add to Chrome,” which then directs users to the Google Chrome store. However, it appears that the app just posts spam photos.

“Complete spam. It posts a spam photos, doesn’t allow you to access that photo, (It showed someone commented on it, I tried to access that comment and it immediately took me away from the picture and removed the notification.) Don’t add this and get your account spammed,” one person wrote of the bogus Chrome app.

The app “will post fake images of persons, who it claims have removed you from their Facebook accounts, to all of you Facebook friends,” reads an alert from Online Threat Alerts.

When one clicks on the website or clicks the original Facebook message, the user will be taken to the website www.FBRemove .com, which will then send the user to www.picmodule .com or www.testyapps .com–which is a website with survey scams. The Picmodule website has the fake Chrome extension that should not be downloaded.

If you get to the survey website, it is recommended that you don’t fill it out. Scammers can sell off the information–including e-mail addresses, phone numbers, or other personal data.

And if you have installed the Chrome application, you can remove it by going to Google’s help section to learn how.

The Chrome extensions with FB-Plus Addon and FaceTracker should be deleted.