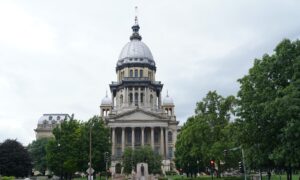 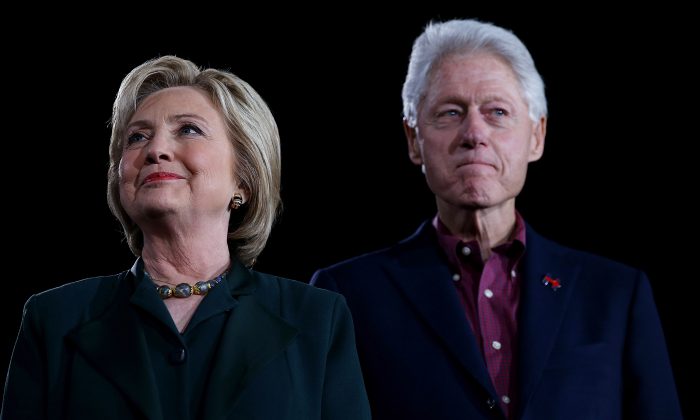 Democratic presidential candidate former Secretary of State Hillary Clinton and her husband, former U.S. president Bill Clinton look on during a "Get Out The Caucus" at the Clark County Government Center on February 19, 2016 in Las Vegas, Nevada. (Justin Sullivan/Getty Images)
Politics

It was April 2009 and Lebanese-Nigerian Billionaire Gilbert Chagoury had an urgent request. He needed to talk to someone at the State Department. While such a meeting might normally take days—if not weeks or months—to set up, if at all, Chagoury knew the right people.

Aides of then Secretary of State Hillary Clinton received an email on April 25, 2009, without a subject line.

In the email, Doug Band, a top official with the Clinton Foundation, asked Clinton aides Huma Abedin and Cheryl Mills to connect billionaire Chagoury to “the substance person re Lebanon.”

Feltman was serving as Assistant Secretary of State for Near Eastern Affairs at the time, after having served as U.S. ambassador to Lebanon for 4 years.

Impressing on Abedin the urgency of the matter he emailed her back 15 minutes later saying:

“Better if you call him.
Now preferable.
This is very important.
He’s awake I’m sure.”

Band had served in different positions in the White House while Bill Clinton was president. In 1999, President Clinton appointed him as “Special Assistant to the President.” Band continued to serve as Clinton’s chief adviser from 2002 to 2012.

According to the Wall Street Journal, Band played a crucial role in negotiations with Barack Obama’s team in 2008 in convincing them to appoint Hillary Clinton as secretary of state.

The emails, which were released as part of a freedom of information request by conservative watchdog group Judicial Watch, have raised concerns about Hillary Clinton’s connection to the Clinton Foundation while serving as secretary of state. It has also raised questions about her and her staff providing favors for top donors while she served in office.

Chagoury is such a donor.

Chagoury was born in Lagos, Nigeria in 1946—his parents were originally from Lebanon. He studied at the Collège des Frères in Lebanon. Chagoury worked selling shoes, according to his website, and then became director of sales for a Nigerian car company. In 1969 Chagoury married Rose-Marie Chamchoum, daughter of a prominent family from the same Lebanese village as the Chagoury family. They had four children and are grandparents.

Chagoury is a friend of the Clintons, and appeared as a top Clinton Foundation donor in 2008. Foundation documents show he contributed $1 million to $5 million, according to the Wall Street Journal, and was on the list again in 2009. The billionaire, along with his wife and three of his children, were guests at the Clinton’s White House holiday dinner, just after Chagoury contributed almost a half-million dollars to Vote ’96, a voter registration committee, according to the The Washington Post. Since Chagoury is not an American citizen, he’s not allowed to donate directly to political candidates.

“Everyone knows I’m friends with the Clintons,” Chagoury said in a 2010 interview with Frontline.

Chagoury is a prime figure in land and construction in Nigeria. He was a close friend and adviser to the country’s late dictator Gen. Sani Abacha, who gained power in the 1990s and was listed in 2004 as the fourth most corrupt leader in history, according to Transparency International.

Chagoury benefited from profitable deals in Nigeria through Abacha, and according to longtime editor of Africa Energy Intelligence Philippe Vasset, “He [Chagoury] was the gatekeeper to Abacha’s presidency.”

He was convicted in Switzerland in the year 2000 for money laundering and aiding a criminal organization linked to billions of dollars stolen from Nigeria’s government under Abacha’s rule.

The billionaire’s attorney told Frontline that Chagoury decided to return the money and agreed to a plea deal. He paid a fine of one million Swiss francs and gave $66 million to the Nigerian government.

Chagoury won immunity from prosecution in a separate Nigerian stolen-assets case by agreeing to give back money that he had in Swiss bank accounts, although the total amount of money he paid is unknown.

In 2010, the United States apologized to Chagoury for an incident in January of that year in which he was detained for more than four hours by officials after his name was found on a no-fly list. He was taken off a private jet at Teterboro airport in New Jersey along with the crew and four more passengers.

“I think a huge mistake is an understatement,” Chagoury said at the time.

“I cannot accept being labeled a terrorist when I am known all over the world as a person who loves peace. It really hurt,” he told ABC News.

The Transportation Security Administration declined to comment at the time when or why Chagoury had been placed on the no-fly list, or who provided a waiver for him to travel to France from Washington DC.

“I don’t know why me. I look at myself as a friend of America, I’ve always loved your country,” said the billionaire, who added that he had traveled regularly to the United States without any problems before the incident.

Philanthropy and the Catholic Church

Chagoury is known for his philanthropy, including donations to St. Jude’s Children’s Research Hospital. The billionaire met with St. Jude’s founder, Danny Thomas, also of Lebanese descent, in 1980 and began contributing to the organization. For his contributions, he was awarded the organization’s highest award, the Founder’s Award, his wife was named “Woman of the Year” by St. Jude in 1988, and a year later he was named “Man of the Year.”

Chagoury is described as a “faithful and devout Catholic” in a bio on his website. He said that the church has looked to him for “personal and philanthropic assistance on many occasions.”

“In 1990, Pope John Paul II awarded him the distinct honor of the Order of Saint Gregory the Great at the rank of Commander for his generosity to the Church and his unwavering faithfulness,” his website says.

The pope also honored Chagoury and his family with a private audience in 1998 as a thank you for his contributions to the church, and was knighted in 2009 by Pope Benedict XVI.

In 1995, Chagoury was appointed by the Caribbean island of St. Lucia as ambassador to the United Nations Educational, Scientific and Cultural Organization (UNESCO).

Chagoury did not respond to a request for a comment.