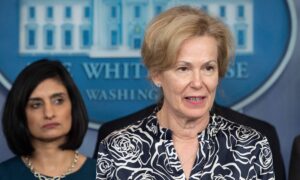 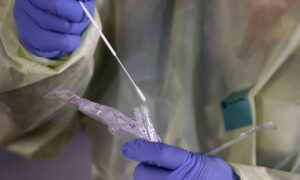 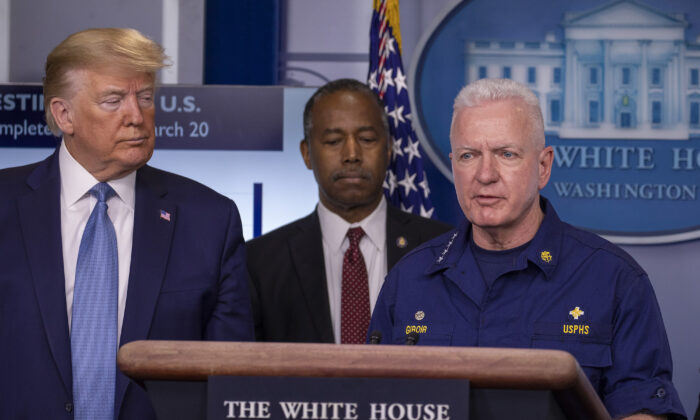 'If you don’t have symptoms, don’t do a test,' Vice President Mike Pence said
By Tom Ozimek
Print

The Trump administration urged Americans that as COVID-19 testing ramps up across the nation against a backdrop of short supply of personal protective equipment and other gear, priority should be given to health care workers, symptomatic individuals, and the elderly.

“State-run drive-throughs are expanding across the country,” Vice President Mike Pence said at a March 21 briefing, adding that the number of Americans tested for COVID-19 through March 20 spiked to 195,000, and that 19,343 people had been diagnosed with the virus at the time.

Dr. Anthony Fauci, director of the National Institute of Allergy and Infectious Diseases, said at the briefing that needless testing by people with no symptoms and in low-risk groups uses up high-priority personal protective equipment (PPE) such as masks and gowns, which are in short supply.

“We do have disparities in the availability of PPEs now, and we’re working hard to correct that, but currently today, we want to make sure that people who are taking care of people with coronavirus disease don’t endanger themselves because they don’t have the PPE,” he said.

“If you don’t have symptoms, don’t do a test,” Pence said, urging people to cancel elective surgical procedures because they, too, consume high priority PPEs and, potentially, ventilators.

‘Scouring the Globe for Medical Supplies’

In New York, the state with the most COVID-19 cases, Gov. Andrew Cuomo said the state has identified 6,000 ventilators to help sick patients keep breathing, but needs 30,000 more. He said the state is sending a million N95 respirator masks to New York City—short of the 3 million that city officials are seeking.

“We are literally scouring the globe for medical supplies,” Cuomo said.

One of the world’s largest makers of ventilators, Swiss-based Hamilton Medical AG, expects to increase production to about 21,000 ventilators this year—from 15,000 last year—by deploying marketing staff to the production line, among other measures.

Hamilton Medical Chief Executive Andreas Wieland said the company is prioritizing countries where the need is most dire.

“We’re trying not to deliver into a country that is merely stocking up reserves, where there is practically no virus, so they can prepare. We’re trying to serve those where the emergency is most extreme,” he said.

In New York City, where more than 6,000 cases have been diagnosed, about a dozen people waited for a test in the parking lot of the Brooklyn Hospital Center.

“That’s insane,” Mark Levine, city councilmember, said in a phone interview. “If they’re well enough to stand in a line, they should be home resting. They don’t need a test, and they need to get out of the way.”

‘This Curve Will Continue to Rise Dramatically’

Adm. Brett Giroir, assistant secretary for health at the Department of Health and Human Services, said at the briefing that the highest priority for testing is front-line staff dealing with the outbreak, as well as for those with symptoms, particularly people in long-term care facilities, those over the age of 65, and with underlying health conditions.

“As you see, this curve will continue to rise dramatically over the next period of time,” he said, pointing to a chart of COVID-19 tests conducted in the United States.

According to data collected by Johns Hopkins University, as of March 22, there were 27,004 confirmed cases of COVID-19 infection in the United States and 402 deaths, including 114 in New York state, 94 in Washington state, and 29 in California.

In ‘Sixth Gear’ of Production

At the White House, officials said they were getting more tests and equipment to where they’re needed.

The U.S. Food and Drug Administration approved a test that can deliver a result in 45 minutes, rather than days, according to Cepheid, its maker.

President Donald Trump said March 21 there had been “a clear call to action to the private sector” to mobilize and produce protective gear and other equipment whose short supply could fast become a constraint on mounting an effective response to the CCP virus as cases grow and testing expands.

“They are really in ‘sixth gear,’ I think, which is responded in full force, helping to produce and supply much-needed masks, swabs, sanitizers, ventilators, and everything else,” Trump said. “There’s a move on that’s incredible right now.”

On March 20, the president announced he had put into action the wartime Defense Production Act, which gives a U.S. president broad authority to redirect resources from the U.S. industrial base to support, among other things, homeland security needs.

“And by way of example, Hanes—everybody knows Hanes, great company, great consumer cotton products company—is retrofitting its manufacturing capabilities in large sections of their plants to produce masks. And they’re in that process right now,” Trump said as an example of U.S. businesses getting in on the effort to fight the outbreak.

Pence said that the FDA approved, “in record time,” a manufacturer that would be producing “millions of surgical masks in a matter of weeks.”

Another example the president gave was of Pernod Ricard, which repurposed several alcohol production lines to make hand sanitizer.

“Their first delivery will be on [March 24]. It’s going to go to various states,” Trump said. “They making a tremendous amount of hand sanitizer, at a very high level, too.”

Carmakers appear to have joined the drive.

General Motors announced on March 20 that it’s working with ventilator maker Ventec Life Systems to ramp up production. Crosstown rival Ford confirmed that it, too, is in discussions with the Trump administration about helping.

“We’re looking at feasibility,” Ford spokesman T.R. Reid said. “It may be possible, but it’s not you go from Rangers [small pickups] one day to ventilators the next. We’re figuring out what is possible now.”

At the March 21 briefing, Trump warned of the dynamics of the COVID-19 spread and gave an update on what he said was “a week of extraordinary mobilization in our war against the virus.”

“It’s now at 148 foreign countries,” Trump said of the scope of the spread, adding, “Can you believe that?”

He said the White House was coordinating its COVID-19 response both internationally and domestically. He praised bipartisan efforts to pass an economic relief package, which White House economic adviser Larry Kudlow said March 21 is worth some $2 trillion.

“We’re one big American family,” Trump said, calling for more solidarity and effort to contain the virus and rebound economically.

He announced crisis-era measures to help families in distress, including suspending foreclosures and evictions for a period of 60 days, and postponement of student loan payments for two months.

The fast-spreading disease has now infected almost 330,000 people and caused more than 14,000 deaths in over 160 nations and territories, triggering emergency lockdowns and injections of cash unseen since World War II.

The global number of confirmed cases is widely viewed as underestimated because of underreporting from mainland China.