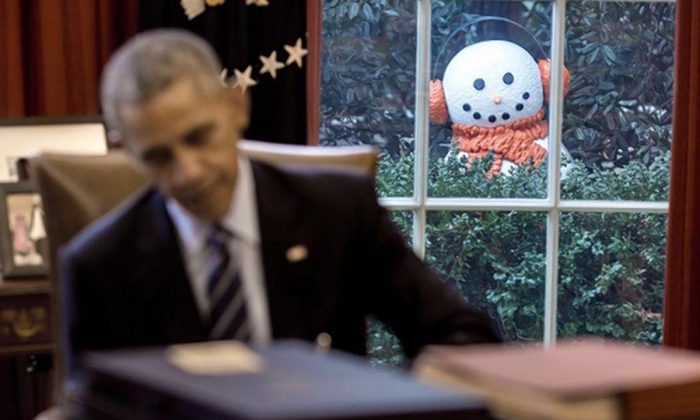 A snowy figure lurks behind the President. (PETE SOUZA/THE WHITE HOUSE)
US

“Sometimes you gotta have fun. For the past three weeks, there have been four snowmen on display in the Rose Garden,” White House photographer Pete Souza wrote on Instagram.

He added: “We’ve been joking that we should move the snowmen a few feet closer to the Oval Office every day to see if anyone noticed. Then we realized the snowmen were too heavy to easily lift.

“But finally this morning before the President came to the office, some helpful staff—I won’t say who—moved all the snowmen so each one was peeking through a different window into the Oval.”

According to People magazine, in an interview with Obama, he’s been unnerved by the prank snowmen.

Another snowman from yesterday. Yes he enjoyed the prank. See previous post for the backstory.

“There’s a whole kind of Chucky element to them,” Obama told People magazine, referring to the doll from “Child’s Play” movies. “They’re a little creepy.”