White House Press Continues to Humiliate Itself During Pandemic 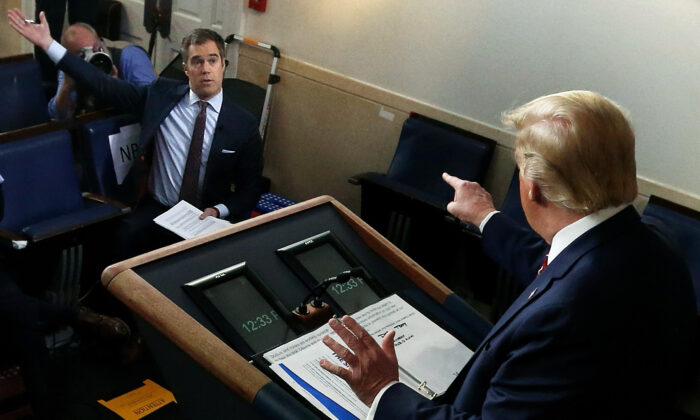 President Donald Trump responds to a question by NBC News White House Correspondent Peter Alexander during a news briefing on the latest development in the CCP virus outbreak in the United States at the James Brady Press Briefing Room at the White House in Washington on March 20, 2020. (Alex Wong/Getty Images)

They should have a sign at the entrance of the White House press room: “Please Check Your Personality Disorder at the Door.”

Either that or Dante’s epochal, “Lasciate ogne speranza, voi ch’intrate”—“Abandon hope all ye who enter here.”

That’s the way it seems anyway, to many of us watching the now-daily press conferences regarding the current pandemic. The assorted paleo-virtue signalers and candidates for anger management training that comprise the White House press corps have, as if it were possible, humiliated themselves more than ever, almost beyond recognition.

To say they are more interested in scoring points against the president than eliciting information or even improving the precarious health and economic situations of their fellow Americans is close to the understatement of the year.

When, on March 20, NBC’s Peter Alexander shouted accusingly at Trump while interrupting another questioner, “What do you say to Americans who are scared?” I knew we were headed for a new low in “gotcha” land.

No good answer was possible from anyone. Trump called it a “nasty question,” which was another understatement. Alexander might as well have screamed the hoary, “When did you stop beating your wife?” (Of course, many of the network reporter’s MSM colleagues jumped to his defense. It’s what they do—hate and circle the wagons.)

And then there was ABC’s Cecilia Vega, who spent the better part of the past week of press conferences enraged, and attempting to label Trump “racist” (what else?) for calling a virus from China a “Chinese virus.” Go figure.

The publication for which I am writing—The Epoch Times—has a more precise name that they are urging others to adopt. It refers to the virus as the “CCP virus” because the Chinese Communist Party (CCP) sat on information about the outbreak for six weeks. From its editorial:

“The name holds the CCP accountable for its wanton disregard of human life and consequent spawning of a pandemic that has put untold numbers in countries around the world at risk, while creating widespread fear and devastating the economies of nations trying to cope with this disease.”

I wonder how Ms. Vega would respond to this. On second thought, I don’t, because I have a pretty good idea she would ignore it, as would a good many of her cohorts in the White House press room.

Although he would recognize its veracity, Trump would be in a more complex position adopting that name. It certainly would obviate the already bogus accusations of racism. (Not that it matters. Calling someone a “racist” these days is about as meaningful as calling a classmate “doo-doo head” in nursery school.)

Nevertheless, Trump still has to negotiate with Chinese leader Xi Jinping on a variety of subjects, while extricating the United States from a supply chain that includes the majority of our medicines coming from communist China. His use of “CCP virus” would likely not be helpful in those circumstances.

None of this would be of much interest to the gang in the press room, for whom the word “subtlety” doesn’t exist.

What’s interesting is that many of the more extreme questions that are short on content but long on hostility come from the well-paid representatives of the television networks—ABC, NBC, and CBS. These companies received their prominent positions in the press room and, more importantly, on our television screens, decades ago.

“When,” as the lyrics go in the great Joan Littlewood musical, “this bloody war is over,” it may be time to revisit the preferences given to these networks that tend to mirror each other in ways that are inherently anti-democratic. Do they have those positions in perpetuity? Why? That could be asked of several other media outlets we could name.

Early in the Trump administration, some effort was given to mixing (democratizing, really) those allowed in the press room. Even some “lowly bloggers” were allowed to ask questions via Skype. That seems to have gone by the wayside. Afterward, during Trump II perhaps, that too could be revisited.

And not to upset Mr. Alexander and Ms. Vega too much, but their antics actually are making Trump II all the more likely. According to a recent Harris Poll, the public’s approval of Trump’s handling of the CCP virus has been improving, up 5 percent from a few days ago. As of March 17–18, 56 percent approve, while 44 percent disapprove, of the way Trump is dealing with the crisis.

Considering the divisiveness of our society and the unremitting enmity of the press, that’s not too shabby.