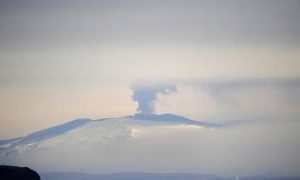 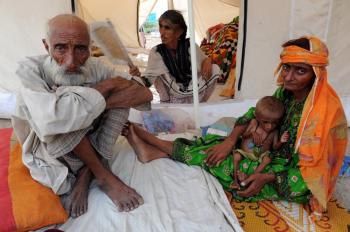 Internally displaced Pakistani woman Nurbano (R) from Jacobabad cradles her malnourished one-and-half-year-old infant at a temporary tent in Sukkur on Sept. 2. One out of six people suffer from chronic hunger worldwide, according the the World Food Program and the Food and Agriculture Organization. (Adek Berry/AFP/Getty Images)
International

Andrey Volkov
View profile
Follow
biggersmaller
Print
One out of six people inhabiting the earth will suffer chronic hunger this year, and a child will die every six seconds because of undernourishment related problems, said reports released in recent days.

Figures released by the Food and Agriculture Organization (FOA) and the World Food Program (WFP) on Sept. 14, estimate that the number of people who suffer chronic hunger in 2010 dropped by 98 million compared to the year before, leaving 925 million hungry, corresponding to 13.5 percent of the world’s population.

Overall, Asia and the Pacific have the most undernourished people at 578 million. Since July Pakistan has also been devastated by floods covering one-fifth of the country, destroying farmland, and submerging entire villages. It is estimated to have affected 20 million of the world’s poorest people.

The new numbers were released Tuesday in advance of the Sept. 20-22 Summit meeting in New York called to speed progress toward achievement of the Millennium Development Goals set by the U.N. in 2000.

Although the numbers dipped over the last year, Gawain Kripke, policy director for Oxfam America, indicated in a statement that it shows little real progress.

“A billion hungry people is more than a food crisis, it’s a political crisis,” said Kripke.

“World leaders have made grand promises before, but promises don’t make nutritious meals and viable livelihoods.”