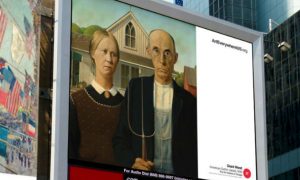 Art Everywhere, but in Times Square, Smothered by Ads
0 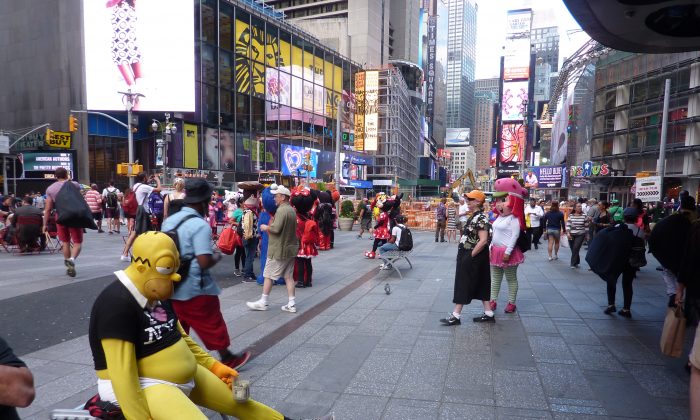 Which Elmo Are You? New Bill to Identify Times Square Costumed Characters

NEW YORK—After a string of embarrassing incidents between tourists and costumed characters in Times Square, council members are pushing new legislation requiring costumed characters to provide identification and be subject to fines if they violate the new set of restrictions.

The bill will require anyone who wears a costume that hides his or her identity to wear an ID.

“We’re saying if you do come out here, we just want to know who you are. I don’t think that’s unreasonable,” said Council member Andy King who drafted the bill.

Times Square Alliance President Tim Tompkins said that the bill would help to distinguish the troublemakers from the honest hard workers.

A sign informs visitors that paying a costumed character is optional, in Times Square, on Monday, Sept. 8, 2014. (Shannon Liao/Epoch Times)

“Unless there’s a system in place, then you could say, Elmo number six was the one causing the problem, but Elmo number one through five are fine.”

Times Square has been hit with thousands and thousands of complaints in recent years, according to Tompkins.

In 2012, a man dressed as Elmo was arrested for reportedly going off on an anti-Semitic tirade.

Tompkins noted that one of his staff members told him an Elmo had patted her on the backside and that Iron Man and a couple of other costumed characters had bullied a Korean man from Washington, D.C., out of his travel fare back home.

“We’ve had a couple of bad apples. … I saw there was an Elmo, who kind of lost his mind. He decided to come out here and disrespect the family,” said King, who explained the incident caused him to create a bill to police these costumed characters.

“SpongeBob SquarePants has to realize he has a code of ethics and conduct he must adhere to when he approaches a family or asks anyone to take a picture,” said King.

The bill will prohibit soliciting in an aggressive manner and will prohibit characters from standing on the road—for their own safety.

“This proposal from Council member King—and some of the world’s richest corporations—only gives the NYPD further justification for ticketing and arresting low-income workers who are immigrants and people of color,” said Sean Basinski, director of Street Vendor Project, in a press release.

King repeated that the bill was about safety, and not about targeting immigrants in this country without legal permission or violating First Amendment rights.

A woman, who dresses up as Officer Friendly, protests with other costumed character workers in Times Square, on Monday, Sept. 8, 2014. (Shannon Liao/Epoch Times)

“There are a few bad apples, but it’s not fair to judge a whole group based on a few bad apples,” said Alex Gomez, spokesman for La Fuente, a pro-worker nonprofit organization representing many of the costumed characters.

A crowd of characters gathered on the opposite side of Duffy Square Monday, chanting slogans in Spanish and English. Gomez said that they wanted more of an open dialogue.

When King learned that the characters were demanding open dialogue, he replied: “I’m a little disheartened right now. I just met with them in the last 48 hours, we had two meetings and a number of conversations on the telephone.”

“Times Square has always been about people offering up interesting experiences, in many different ways. We’ve had the Naked Cowboy for years, there’s never been an issue with that,” said Tompkins. “This is Times Square. Quirky is fine, creepy is not.”