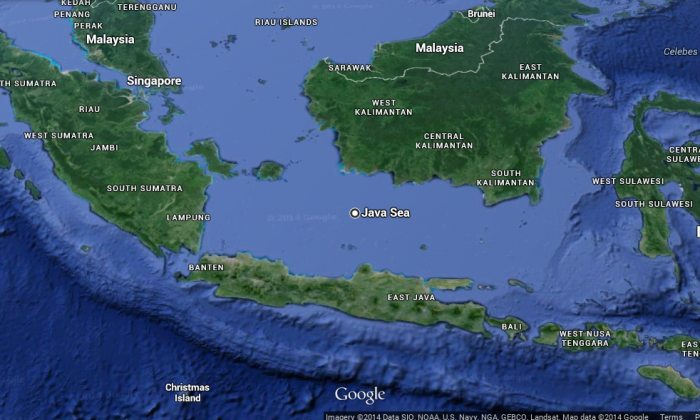 The approximate location of the wreckage discovered is marked with the dot in the Java Sea, below Central Kalimantan in Indonesia. AirAsia Flight QZ-8051 was flying from the country to Singapore when it vanished. The wreckage indicates that it crashed in the ocean.
AirAsia Disaster

Wreckage and bodies from the missing AirAsia plane have been discovered in the Java Sea on Tuesday.

The location is approximately 110 miles southwest of Pangkalan Ban in Indonesia.

The plane, flight QZ 8051, was en route to Singapore from Indonesia early Sunday when it disappeared, leading to a frantic search.

The aircraft had 162 people on board, including 155 passengers.

We are sorry to be here today under these tragic circumstances. We would like to extend our sincere sympathies to the family and friends of those on board QZ8501. Our sympathies also go out to the families of our dear colleagues,” Sunu Widyatmoko, Chief Executive Officer of AirAsia Indonesia, said in a statement.

The wreckage was found south of Pangkalan Ban on Borneo Island in the Karimata Strait.

The area was part of the extended search launched after an initial, narrower search yielded nothing.

The dot marked Java Sea marks the approximate location of the wreckage found so far.

Early reports indicated that the plane crashed off of other islands, including Belitung island,. Fishermen off that island, which is east of Borneo island and northwest of where the wreckage was found, said they heard an explosion around the time that the plane disappeared, but a search of the water around the island didn’t turn up anything.

The Indonesian navy told Reuters that 40 bodies have been recovered but the main body of the plane still hasn’t been found.

Pictures of floating bodies have been broadcast on local television, while relatives of the missing gathered at a crisis center in Surabaya after being brought in by the airline.

The search has involved several dozen ships and about two dozen aircraft from Indonesia, Australia, Malaysia, Singapore, South Korea, and the U.S.