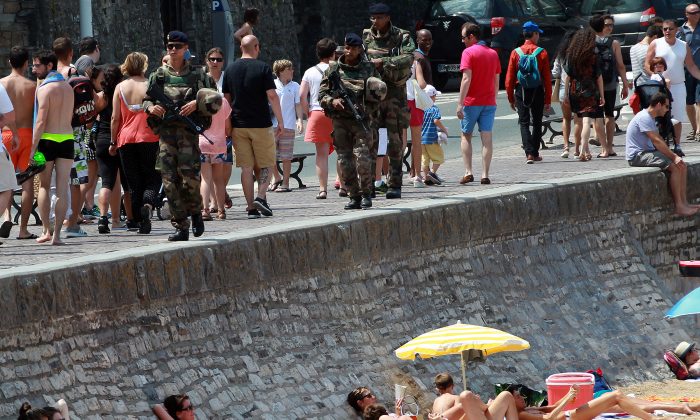 PARIS—You can’t put a guard in every church and patrol every beach. But after a wave of attacks in Western Europe, authorities are struggling to protect their people as best they can. The French Riviera city of Cannes has banned large backpacks on beaches lest they hide explosives, and Britain is providing extra funding for security at tens of thousands of places of worship.

The grisly slaying this week of an elderly priest celebrating Mass in a Normandy church, less than two weeks after 84 revelers were mowed down by a truck on a beachfront promenade in Nice, sounded the alarm that nothing is sacred and no place is safe. Four attacks in a week in Germany sealed that conviction.

“Churches take great pride in being open. But there comes a time when the reality of crime and the reality of terrorism may mean that some of that balance needs to be readjusted,” said Mark Gardner, spokesman for Community Security Trust which provides extensive protection to Jewish synagogues and schools throughout Britain.

After Nice, France Grapples With How to Combat Terrorism

The Trust started operating in 1994 after a car bomb attack on the Israeli Embassy in London injured roughly 20 people and a devastating attack on a Jewish cultural center in Buenos Aires, Argentina, killed 85 people.

The attacks in France and two of the four in Germany were claimed by the Islamic State (ISIS), thousands of miles away in strongholds in Syria and Iraq. Their preferred targets are symbols of what they label the “crusader” West in Europe, but with so many to choose from, no one can predict where terror might strike anew. A police couple was killed in June in their home west of Paris, in an attack also claimed by ISIS.

France has been muscling up its security forces since two waves of ISIS-claimed attacks in 2015 that left 147 dead — and after two March attacks in Belgium that killed 32. President Francois Hollande has ordered 10,000 soldiers who have been patrolling since last year to stay in the streets, has called up reserves to bolster police and borders, and plans to use some to create a National Guard.

But the challenge of protecting churches, synagogues, tourist haunts, beaches, summer festival sites, airports and train stations is among the most daunting tasks security forces have faced in recent times in France, and Europe.

The city of Nice, citing the terror threat, canceled a memorial march set for Sunday to honor victims of the attack on the famed Promenade des Anglais.

French Interior Minister Bernard Cazeneuve visited security forces sent in Friday at the start of a famed two-week jazz festival in the village of Marciac in the Gers, an annual treat for hundreds of thousands of jazz lovers — but a high-risk event for police. Cazeneuve reiterated what the French hear daily — “There are no miracle solutions” — but insisted on the need for the “physical presence” of police at summer festivals around France.

Some towns are pitching in as they can, or inventing new rules to ward off threats.

The Riviera city of Cannes, 33 kilometers (20 miles) from Nice, has banned big bags on beaches until at least the end of October, bags that Mayor David Lisnard says “could contain explosives or weapons.”

More controversially, the mayor of Rive-de-Gier, a small town near Lyon, decided this week to “systematically refuse” new applications by residents to bring their families to live with them, a process most often used by immigrants with loved ones in another country.

Whether the mayor can actually change national policy allowing families to live together remains to be seen, but the initiative reflects a rising level of fear — often directed at immigrants even though many assailants have been European-born.

“Today, no commune in France is safe,” Mayor Jean-Claude Charvin said in a statement on the town’s website. “Each day, the government says ‘We’re at war’ … (it) must give small towns the means to protect their citizens.”

Trying to prevent attacks using intelligence is just as daunting. French security services twice missed catching the two 19-year-old Frenchmen who slit the throat of Rev. Jacques Hamel before they acted. In a glaring example of the challenge, four days before the attack the main counter-terrorism agency issued an all-points alert to police with a photo of one of the attackers warning the man pictured may be preparing an attack — but no one knew his name.

Now, a lot of attention is focused on securing places of worship, particularly small vulnerable churches like the one in Saint-Etienne-du-Rouvray that came under attack on Tuesday.

Shockwaves crossed religions and borders. Some of Rome’s more famous churches and basilicas already figure among the more than 4,000 places in Italy deemed at particular risk for extremist operations, but the French attack has also brought attention to the vulnerability of little-known churches in outlying neighborhoods. Officials have also requested additional police security at Milan’s Duomo cathedral after the attack and in light of a security breach that saw an American tourist spend the night on the spired rooftop after being overlooked by security.

“I don’t see a reason to militarize churches,” Cardinal Angelo Bagnasco, the head of Italian Bishops Conference told Sky TG24. “Of course you can’t let down your guard, it is always necessary to be alert and to collaborate with Europe. But there is no need to be afraid, because otherwise you play the game of these homicidal fanatics.”

In Britain, where the overall threat level is judged “severe,” police have warned Christian religious institutions throughout the country to be extra vigilant, and even small rural parishes are expected to take note and review procedures and defenses. The British government announced the details of a plan to provide extra security funding to places of worship on the day of the attack on the French church.

France has more than 50,000 Catholic churches, Britain has roughly 47,000 chapels and meeting houses of various Christian denominations, and steeples dot the landscape of most other European countries.

In France, most synagogues, mosques and major Christian churches have been protected by police or soldiers since the deadly attack at the Charlie Hebdo satirical newspaper and a kosher supermarket in Paris in January 2015.

After the French president met with religious leaders this week, the president of the Protestant Federation of France, Francois Clavairoly, stressed that much has already been done to protect places of worship of all faiths.

“Obviously, more security measures for every place of worship in the country are absolutely inconceivable and unfeasible,” he said.

Since the priest was killed, Muslims in France and elsewhere in Europe have stepped forward to embrace the nation’s Catholics in a way rarely seen, an act of bravery because the Islamic State group views Western Muslims as the enemy, too.

The head of the Finsbury Park Mosque in London, which has distanced itself from extremism since being associated with it in the 1990s, says “extra measures to be careful” are being added to its closed circuit TV cameras and security guards.

“We are all now under threat,” Mohammed Kozbar said.